IsSixWeeksAfterFashionWeek = false
By Bridget Foley and Marcy Medina on May 7, 2015 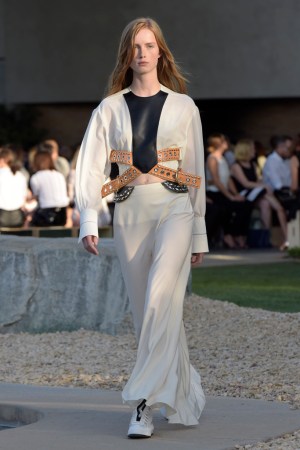 One of the most famous designers in the world working for one of the most storied brands in the world owned by the largest luxury conglomerate in the world would show his resort collection at an audacious midcentury residential masterpiece designed by a visionary, iconic architect for an even more iconic Hollywood legend and his wife. Anticipatory buzz? Of course. Nicolas Ghesquière’s cruise extravaganza for Louis Vuitton at the Bob and Dolores Hope Estate in Palm Springs, Calif., on Wednesday evening lived up to the hype. And that was before Catherine Deneuve smoked a cigarette inside the house. Thank God, and John Lautner, for concrete.

Though a relative newcomer to the itinerant extravaganza, Ghesquière commanded the concept with the surety of an expert of the genre who understands how to transform a moment into a global marketing coup, one that — almost by definition these days — must strike a balance between high concept and commercial savvy.

Ghesquière’s boss credited the designer 100 percent with deciding on the spectacular setting, with its famous and endless vistas. “First of all, it’s Nicolas,” said Bernard Arnault, chairman and chief executive officer of LVMH Moët Hennessy Louis Vuitton, who attended the show with his son Alexandre, with whom he’s been traveling the West Coast, and daughter Delphine. “Nicolas [responded to] the architecture and the incredible sight. You have the desert and incredible view.” He added, in a reference to Vuitton’s historical raison d’etre, “When you are here, you think extraordinary travel.”

Asked about California’s growing fashion importance, the LVMH chief replied, “We are now in a world which is really moved by a digital economy and [California] is the world center of the digital economy. I think Los Angeles is evolving a lot now and I know a lot of people living in L.A. They’re in L.A. from almost all over the world, from Europe, from China.”

But this day was about Vuitton. Arnault mused that “this may be the last time anyone does a show in that house. It has been sold — I guess.” (A rumor circulating at the party had Tommy Hilfiger the buyer. In fact, he looked at it but passed.)

The house and its spectacular views set imaginations swirling. “I feel like I’m on a lunar landing or something. It’s like another planet,” said Michelle Williams, one of many celebrities on hand.

Even the usually unimpressed Kanye West was impressed. “I wasn’t going to do a long interview,” he said. “I don’t want to speak too much. But I can say it’s dope. It’s very dope.”
Liz Goldwyn approached the event like a true fashion pro. “I love going to see something on location and I’m excited that more designers are doing it now,” she offered. “It’s amazing to have Nicolas in California. He totally gets it.”

Anyone familiar with Ghesquière’s work would find it unsurprising that the designer was drawn to the house, a huge concrete, steel and glass oculus that looks both at one with its natural surroundings and as if a giant space ship had descended, embedding itself in the mountain side. Ghesquière has long been fascinated by futurism and this house presents an arresting last-century snapshot of a view of the future. What did surprise: The way in which Ghesquière translated the inspiration.

“The John Lautner house with its Brutalist architecture and the feeling of the Hollywood glamour — it’s such an inspiration,” he said after the show, swarmed by well-wishing clients and celebrities who’d been flown in from around the world. “It was quite minimal for me, but at the same time, [there were] things that were almost sweet. So it was really this contrast between sweet and the brutalism here in Palm Springs.”

Rather than revive the Space-Age rocker look on which he skyrocketed to fame at Balenciaga or the trim, structured side of the Seventies dominant through his still-young Vuitton tenure, here Ghesquière combined languid grace with an unmistakably raw sensibility inspired in part by Robert Altman’s mesmerizing film “3 Women.” He said the collection was about a community of women in the desert, but there was plenty of street to their attitude — and even a nonspecific waft of Margiela to the models’ undone air as they wended through the cratelike seating (albeit crates made of glass, mirrors and fine wood). Ghesquière called the contrast an “intriguing confusion.”

The primary silhouette featured a full-ish top cropped short, its stretch banding baring the midriff over a long, fluid low-slung skirt. At times the top was rendered as an abbreviated motorcycle jacket; at others as a sparkly take on a sweatshirt. Brutalist aspects came in accents of leather and hardware: a wide grommeted belt crisscrossing in front; capelet-like sleeves punctuated by multiple rows of grommets. Conversely, a group of long dresses with sober frills drew on gentle notions of Victoriana and looked spectacular in leather lace.

The collection marked a clear digression from the precision and polish that have long marked Ghesquière’s work and a move toward a more casual, raw aesthetic that may surprise and challenge his client base.

Those at the show and after party at The Parker Palm Springs resort, both the celebrities and a host of Vuittoned-decked clients, loved it.

Swedish “It” girl Alicia Vikander, star of the futuristic hit “Ex Machina,” likened the house to a giant UFO — a good thing — and was equally enthusiastic about the clothes. “There were a lot of dresses that I would just dream of wearing,” she said. “Those long dresses are so wearable. I love that he mixes them with sneakers that a lot of girls including me will run to the store and buy.”

Selena Gomez found that the stunning setting helped her focus on the clothes. “I like when people go out of the ordinary,” she noted. “It really inspires you. I haven’t been to a ton of fashion shows, but this is definitely elaborate and beautiful and keeps you focused more on what you are here to see. If you are used to seeing the same routine and the same place, it gets boring, at least for me.”

British ingenue Nathalie Emmanuel was at her first fashion show. “I feel so spoiled to have seen such a fantastic one,” she said. “I loved how they used the space. I came away having new ideas about outfits. It just hit all the spots for me.”

Hitting all the spots comes at a price, a topic Vuitton ceo Michael Burke was disinclined to discuss. He said audacity rather than deep pockets is the primary essential to staging spectacular shows. “If you are willing to take risks, and you’re audacious, anyone can do it. It’s the risk-taking. That’s what’s lacking,” he said. As for the mundane matter of the cost of this show, he offered: “Enough. It’s worth every penny. Don’t you agree?”

Back at the Parker, legions of revelers would have offered a resolute “Yes!” The resort’s grounds became a series of outdoor dining rooms with buffets offering tacos, ceviche and mango salad, and guests found seats around fire pits, in hammocks and at picnic tables.

The dinner hour lasted nearly two before the real after party started. Toward the back of the resort, an adjacent lot had been transformed into an outdoor carnival complete with a bumper car ring, video games and photo booth. “I feel like we’re at weekend three of Coachella,” said stylist Petra Flannery.

As if on cue, a gaggle of teenage models started gyrating and Balthazar Getty dashed past looking festival-ready in a T-shirt and backpack. Meanwhile, the hoodie-clad West ambled over with suit-clad Alexandre Arnault to check out the video game arcade where a long line of women waited for a turn at a mechanical claw booth where the elusive prizes were monogrammed Vuitton clutches.

“This is so much fun,” said Ghesquière as he took a break from the dance floor, where Grimes was spinning the Spice Girls and Mariah Carey. “I wanted people to stay and play and have a good time.” He got what he wanted. Even though the police came at 10:30 p.m. to investigate the noise, the party raged on until 1 a.m.