Brian Wolk and Claude Morais presented their resort lineup at The Standard Hollywood hotel, in a disco setting.

IsSixWeeksAfterFashionWeek = false
By Marcy Medina on May 25, 2016 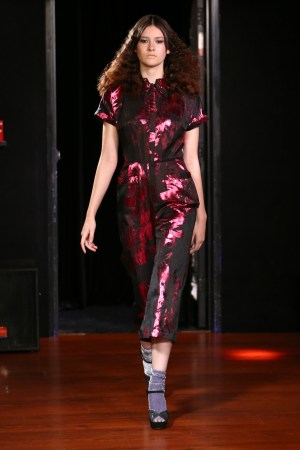 The Los Angeles romance continues for Brian Wolk and Claude Morais, who presented their resort lineup on Tuesday night at The Standard Hollywood hotel. The third collection and runway show the partners have produced since moving from Brooklyn and founding the line here was an ode to Saturday nights in Tinseltown.

“In general, our work since we started Wolk Morais has been this trajectory where we were inspired by our life around us,” Wolk said. “First was [multicolors, presented in a modern art gallery], and the last was inspired by our love of nature and hiking [shown in the now-defunct French Market Café]. This is really our Saturday nights out here.” He was referring specifically to Giorgio’s, the Saturday night dance party held inside the hotel’s tiny backroom discotheque, run by producer Bryan Rabin and DJ-to-the-President Adam Bravin, who agreed to mount a Tuesday-night version of the party for the runway presentation. As smoke filled the air and the disco balls spun, starlets including Cody Horn, Debby Ryan, Arden Cho and Katherine McNamara sipped cocktails while perched on sofas in the club’s VIP area — editors, buyers and friends sat in folding chairs along the runway.

What followed was a 27-look collection of black denim day dresses trimmed in metallic brocade and disco-worthy dresses and jumpsuits in colorful lamé and striped brocade. There were even a few items thrown in for the boys: a gold lamé tuxedo jacket, a more traditional set of black tails and a black marabou coat, which could work for the girls, as well.

Morais explained the collection was “our interpretation of Saturday nights dancing and that sublime young Hollywood [actress] who’s been wearing our clothing.” It’s not just “young” Hollywood who’s adopted their look. Thanks to celebrity stylist Elizabeth Stewart, who has mentored the designers and styled all of their shows, Cate Blanchett and Julia Roberts have worn Wolk Morais’ polished denim dresses and jumpsuits at press calls in Hollywood and Cannes.

While that particular look was again a success this season, some of the more fanciful evening pieces — surely intended for Millennials too young to have worn the original bubble skirts back in  the Eighties — felt a bit overwrought. A draped silk mini over a short tulle petticoat wasn’t as appealing as the well-constructed denim corset that went with it. Oversize bows worked on the jumpsuits and short dresses; the spiral ruffles and rosettes not so much.

What the duo did nail was the way Angelenos, and increasingly more women around the world, organize their closets: denim for day, special going-out pieces for night, all in seasonless fabrics. “Here people can wear their favorite things all year round. Obviously there is always a time for a coat or jacket, but we just decided that when that time comes, it calls for some feathers. It’s not fur and it’s not wool but it’s something fantasy and fabulous you can wear any time of the year,” Wolk said. And can get any time, as well: While they experimented last season with see-now-buy-now and e-commerce, this season their clothes are set to be delivered to store or private clients within one week of orders being placed. The city’s flexibility has freed them from traditional retail or fashion show timelines, as Morais pointed out.

“Our romance with L.A. doesn’t have to be a one-night stand,”  the designer added. “It’s become a steady affair.”