In his first resort show, the designer played up pansies, in all their florid, slightly sinister glory. 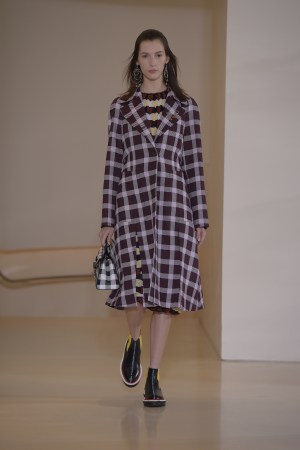 It was Christopher Kane’s first runway show for resort, and to set the scene he stripped down the interiors of his Mount Street store and filled them with scores of pansies in pots along the walls and artfully arranged mounds of dirt on display shelves. That flower was the power behind a sophisticated, shiny collection of roomy silhouettes, including boxy jackets, pleated below-the-knee skirts and fluttery dresses with outsize photo prints of pansies. “I didn’t want ditzy flower prints, I wanted the pansies big, menacing and mischievous,” said Kane after tightly edited show, whose audience, seated on white benches around the room, included Kering’s chief François-Henri Pinault.

Kane said many of the silhouettes were meant to evoke “a schoolgirl at an awkward age, just blossoming.” Clearly, she wasn’t shopping at Marks & Spencer for her uniform. Instead, Kane’s girl was decked out in boldly checked jackets and coats, some inset with pansy printed fabric, and others adorned with sequin-encrusted collars or belts made from brightly colored seed beads that had a primitive, artisanal feel.

Iridescent sequins covered several skirts, too (“It was my Cinderella, Disney moment,” Kane said), while dresses were whisper-thin, their edges cut to mimic the curve of the pansy’s petals.