Erdem Moralioglu's main influence were the modern girls of early 20th-century Japan, who adopted Western garb with a quirky twist. 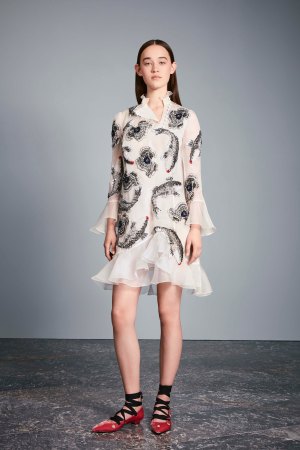 Erdem Moralioglu channeled his enduring fascination with Japan’s early 20th-century “modern girls,” who put their own quirky spin on western dress, into his resort collection. The lineup featured colored embroidery worked onto the surface of stiff cotton drill trenches, motorcycle jackets, and even a black leather dress, giving the looks the air of handcrafted couture.  Swirling koi carp patterns were picked out in sequins and sparkles across a delicate silk chiffon dress, while faux jewels were dotted around the neckline of another in black cloqué. A leopard-printed rabbit fur coat was inset with black lace trim, while a tailored faded salmon suit shone with gold embroidery.

Switching gears, Moralioglu also worked traditional men’s shirting fabrics into a series of dresses: He spun light blue cotton poplin into a long ruffled, tiered skirt and matching top that had a whiff of “Gone With the Wind.” An aura of historic romance permeated other looks in which Swiss guipure lace played a starring role, such as dresses with cutout shoulders or tiered ombré ruffles — all of them were executed with the designer’s characteristic light touch.