For resort 2017, Marc Jacobs showed a feisty Eighties romp that screamed flamboyant fashion at every turn. 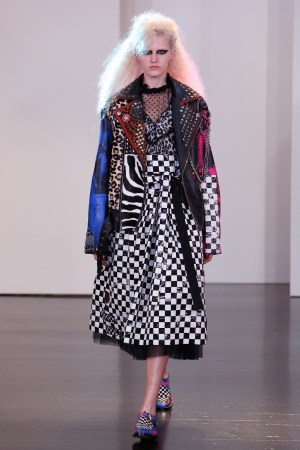 It was like an itinerant show, but without the power venue, hotel or fear of disease-carrying bugs. In other words, the resort collection Marc Jacobs showed on Tuesday morning — the day after winning the CFDA Award for Women’s Wear — was a spectacle of the sartorial sort, screaming flamboyant fashion at every grommeted, logoed, pink-flamingo-ed turn. “God knows, we’re just doing a nice showroom presentation,” Jacobs said during a preview on Monday afternoon. “It doesn’t mean the clothes should be nice little showroom clothes, right? There’s plenty of that.” A sliding door away, the foyer was occupied by about a dozen models awaiting fittings; hence, Jacobs’ insistence that he wouldn’t make the Awards fete. “I need to be at work,” he said. A last-minute change of heart required the canceling of the first of his two shows (every hour counts) in favor of a single 10 am presentation. (Actual start time: 9:58).

This was as retro-feisty as it gets. “Miami Vice Rococo!” one guest quipped on the way out. It was also a deep dive into the house archive. While the show’s grounding in the crimped-hair, pile-it-on overstatement of the Eighties made obvious connection to Jacobs’ last spring outing, it was rooted, too, in fall’s melancholy masterpiece, but less obviously so. Fall’s shots of moody pinks and purples here erupted into shocking tones; its voluminous grandeur reinterpreted as rustling fare for girls who just want to have fun.

Jacobs worked it all into a decorative frenzy: More is more, more and much, much more. Yet he worked in moments of (relatively) calm chic: an impeccable trench; a sinewy lame shirtdress with shades of metallic and YSL. He also made a deliberate, if not necessarily obvious, statement of high-low, both the traditional kind (the integration of affordable clothes) and something else altogether (a look in an intricate multimaterial pastiche that included strips of python and five-dollar-a-yard plastic something-or-other. Madcap fun? Absolutely. It was also a treatise on impeccably realized bravado.