Erin Beatty and Max Osterweis sent out a travel-inspired lineup of "must-have items." 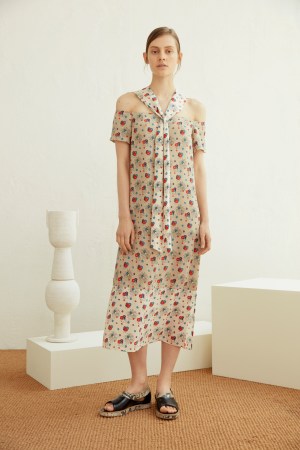 “I was traveling nonstop — two days in L.A., two days in N.Y., two days in Italy — and pulling clothes in and out of the bag. So I started thinking of a travel collection, pieces that you can layer together, dress up or down,” said Suno creative director Erin Beatty. As a result, resort became a series of looks with that “I am going or coming from somewhere exotic” vibe.

Suno’s aesthetic has always been very global since its inception, but this time around, as Beatty pointed out, it was more item-driven. Tops, for example, ranged from Japanese floral puffed-sleeve numbers to embroidered peasant styles to baja striped button-ups; skirts were flared and midlength, with drawstring tassel details or tiered for extra volume. Dresses included a memorable, multicolor plaid off-the-shoulder look; the same plaid also came as a peplum skirt. And the piece of the season — denim overalls — also made an appearance, in a wide cropped-leg version.

“It’s just basically all the pieces you would want in the moment,” Beatty said. “What am I craving?”