Turk took us to Waikiki Beach for a vibrantly cheerful collection. 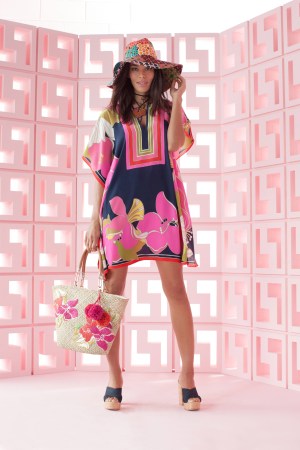 Trina Turk’s vibrant color-print combos always seem to cater to a woman on vacation. This season’s destination: Waikiki.  The designer, who is opening a store there in August, was inspired by Honolulu’s mid-century architecture — especially Shangri La, the Middle Eastern-influenced mansion built by heiress Doris Duke — as well as the local tropical foliage.

Lehua florals in a punch of hot pink were splashed over both breezy and tailored separates; highlights included a hibiscus print on a tunic with scarf print border, paired with an iridescent, natural stone pendant. Shangri La-inspired patchwork prints appeared on a preppy blazer-and-Bermuda shorts combo and an off-shoulder dress (a spring trend that has done particularly well for the brand). Offsetting the loud prints was a brushed twill, military jacket in drab green — even though it boasted a beaded pink corsage.

For Mr. Turk, there were Bermuda shorts and blazers in the same Shangri La patchwork, and Turk’s trademark short “mechanic’s suit” in navy.