For resort, Zac Posen sent out an extensive, well-thought-out lineup whose circus vibe wasn't too cute. 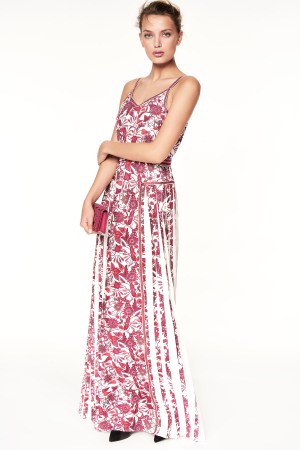 For resort, Zac Posen sent out an extensive, well-thought-out lineup, showing heavily detailed pieces that managed to hit the Zac Zac Posen target price point (which ranges from $150-$1300). “It’s not easy, but we have learned so much,” he said, adding proudly, “Last year alone we saw a 40% percent increase in sales.”

It’s hard to make a circus theme work without falling victim to kitsch, but for the most part, Posen managed as he “played with all-over embroideries, ruffles, piping, [pom-poms,] polka dots and a poodle print.” The black leather jackets and a gray ribbed dress featured only the subtle outline of stars; the printed pups on tied blouses were small enough that they were not obvious (in fact, not even observed at first glance). The tiered gowns featured no embellishments at all.

It all kept, things were balanced, cool and certainly “fun!” as the designer put it. Perhaps the key is really in the details.