IsSixWeeksAfterFashionWeek = false
By Jessica Iredale on May 12, 2017 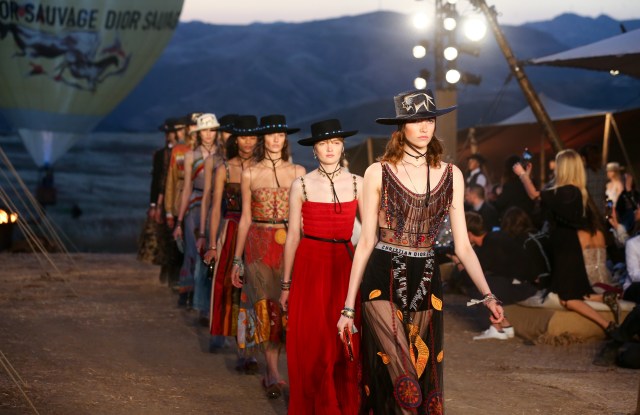 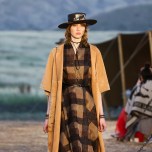 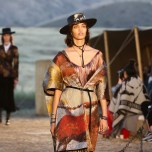 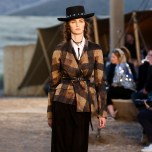 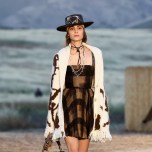 For Maria Grazia Chiuri’s first cruise collection for Dior, the house created no less than a “Wizard of Oz” moment. Toto, we’re not in Los Angeles anymore.

Technically the show wasn’t in L.A. — it was in Calabasas, the tony suburb in the Valley with famous residents such as the Kardashians. But when guests arrived at the actual venue, shuttled by a military grade supply of SUVs up a dirt mountain road in the Upper Las Virgenes Canyon Open Space Preserve, and then by a smaller fleet of Gators, they might have thought they were on safari in the desert hills. The only thing “Hollywood” about the location in the Santa Monica Mountains was that it resembled a big-budget movie set, strewn with retro trailers and modernist tents pitched around piles of pillows, benches and woven carpets. Waiters kept the Moët flowing. Two hot-air balloons floating in the background bore the words “Dior Sauvage,” as did a sign erected on a hilltop yonder in a nod to the iconic Hollywood sign.

To see the celebrities in the front row, click here.

“I was happy to find the location — it was not so easy,” said Chiuri in the understatement of the century the day before the show.

This was her biggest moment since arriving as the first female couturier at the house of Dior for spring. Not just because she had an epic set. The collection lived up to it. After two ready-to-wear seasons where she seemed to be getting her bearings, Chiuri’s cruise collection captured the depth, texture and attitude that likely lured Dior to poach her from Valentino in the first place. Did the lineup’s overall look, marked by nipped Bar jackets and robes over full midiskirts inspired by earth mother muses including Georgia O’Keeffe and Vicki Noble, bear resemblance to the aesthetic she and Pierpaolo Piccioli established at Valentino? Yes. Is that always going to be a strike against her?

There’s no denying that in a very short span of time, she’s made an impact on Dior, most obviously in the branding and reinvigoration of the house logo — on dress straps, bags, sling-back kitten heels, bracelets, underwear and T-shirts.

Chiuri let the location, the desert landscape and natural California elements, inspire the collection, which was flush with handcrafted details, artisanal touches — fur, shearling, feathers, fringe — and rich desert colors. She obliged house heritage by finding a concrete California connection to Monsieur Dior, who visited San Francisco in 1947, and a more tenuous tie to the look she wanted to pursue: Dior’s 1951 Ovale line included prints inspired by the primitive etchings in the Lascaux cave in Southwestern France, which Chiuri reworked for cruise. Sauvage referenced the famous Dior perfume Eau Sauvage.

But mostly Chiuri used her own interests to drive the lineup, gathering a collection of muses that dovetailed with the feminist spirit she’s infused the house with beginning with the spring “We should all be feminists” T-shirts. Photos of Georgia O’Keeffe by Ansel Adams, Cecil Beaton and Philippe Halsman were all over Chiuri’s mood board. She had seen “Georgia O’Keeffe: Living Modern” at the Brooklyn Museum, and co-opted her independent, desert-dwelling attitude and personal style for the collection. Almost every look was worn with O’Keeffe’s signature headgear: a bandanna under a wide-brim straw hat by Stephen Jones. Feminist tarot card sketches by Vicki Noble, a feminist shamanic healer and author, known for “Motherpeace Tarot,” were another key motif.

The capabilities of the Dior ateliers were on parade. There were desert brocade bustier dresses with animalia etchings and suede fringed Bar jackets over full skirts and ruggedly chic hiking boots. Chunky fringed knit cardigans featured human patterns. The breadth of fare and fabrications was vast, yet the look always consistent. There were colorful feathered dresses, a colorful leather Western shirt, earth-toned robes, leather moto jackets over embroidered tulle skirts, a rainbow patchwork dress, denim, fur vests done in cave patterns, as well as immaculate, austere black and white looks, like a beautiful sober coat over a starched white shirt.

Modest cuts could appeal to the adult woman, while young, sexy sheer stuff can be broken down into modern streetwear. The vibe was creative but tasteful, suitable for canyon-dwelling women of means, the stylish shaman who is down to earth and the Coachella-goer who grows up. With upward of 80-plus looks shown on the runway, Chiuri gave her audience and customer options.

Editing wasn’t a concern. “Nobody’s running to the other side of the city to see another show,” said Chiuri. “Here, it’s so specific. You come to see this collection.”