Joseph Altuzarra referenced Patrick Bateman and the French countryside for a collection full of newness and some risks. 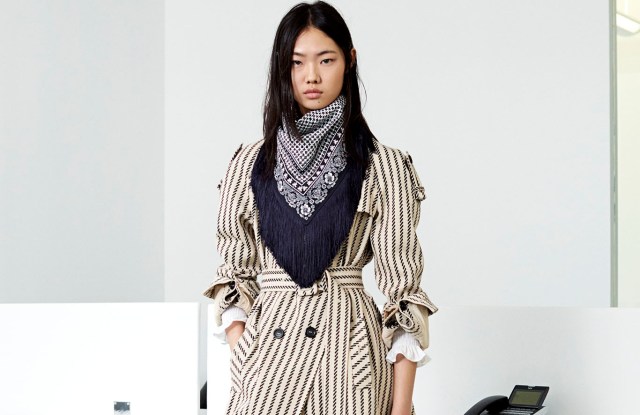 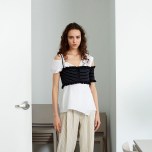 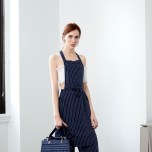 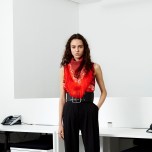 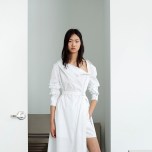 After several seasons of hunkering down on the very unsexy concept known as branding, Joseph Altuzarra has established some airtight house codes for himself: shirt dresses; sharp, feminine tailoring done with a European hand; and eveningwear with folkloric accents. He’s got his handbags and hardware, too. Now, how to progress and finesse his signatures to keep the look fresh and creative?

For resort, he plied a city-country tension, the former influenced by classic New York corporate life, the latter hailing from Brittany, France. The collection offered a lot of newness and took a couple of risks.

“I was watching a lot of movies that had to do with corporate uniforms — ‘American Psycho,’ ‘Working Girl,’” said Altuzarra during his presentation. “I took workwear staples, broke them down and put them back together.” The first few looks he presented were strong, chic blends of the urban-pastoral idea applied to Altuzarra standards. He eased his typically taut tailoring and lean, mean silhouettes. A traditional Mackintosh cut with gentle asymmetry at the hem was printed with a navy and khaki play on pinstripes and layered with a fringed silk scarf inspired by classic Breton scarves. Another play on the trench came on a lean sundress, and a crisp white shirtdress was twisted so it unbuttoned to flash the collar bones and styled with white boxer shorts in a wink at Patrick Bateman.

Softening and literally expanding the tailoring was one of the collection’s experiments. A magenta blazer was cut wider and boxier than the nipped-waist style for which Altuzarra is known, though that didn’t necessarily make the jacket easier, especially as it was shown with matching boxy pants. Eventually, the Wall Street look gave way to a Breton scarf motif — they were fused with tailored jackets or wrapped into scarf dresses. For evening, Altuzarra wanted something slightly informal. A dotted tulle overlay edged in exquisite floral embroidery veiled a pink camisole and jeans, and the final looks paired similar sheer embroidered scarf overlays with mismatched slips in bright colors.