Split into color-coded sections, the lineup was designed to ensure continuity as Clare Waight Keller prepares to present her first collection. 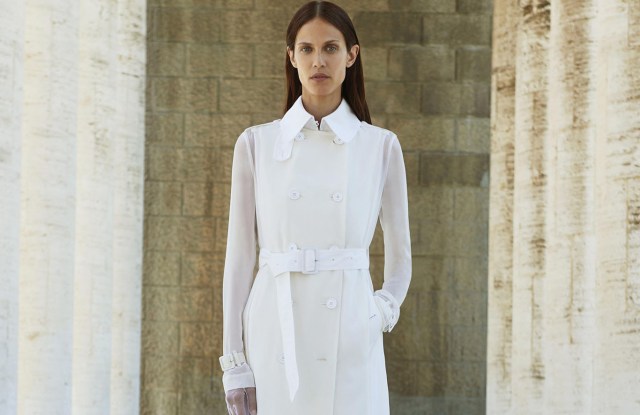 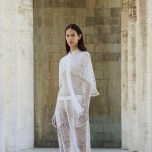 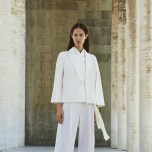 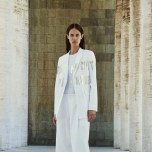 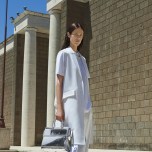 In the temporary absence of a creative director (in the gap between Riccardo Tisci’s departure and the arrival of his successor Clare Waight Keller last month), the Givenchy design team doubled down on house codes for its spring pre-collection, which was inspired by three locations in Rome.

Having staged its pre-collections in cities like Copenhagen and Naples in the past, the choice of setting this season was inspired by the opening of a Givenchy flagship on Via del Babuino, which connects the busy Piazza di Spagna and Piazza del Popolo.

Segments were defined by color: white for classic tailored looks, fuchsia for directional designs, and electric blue for the more laid-back, urban component of the collection.

The marble colonnade of the Museum of Roman Civilization was echoed in the elongated white silhouettes created by layering matching tops, jackets and pants in fabrics ranging from gauzy tulle to patterned silk jacquard.

The effect spanned from ethereal — think a cape-shouldered lace pussy bow blouse — to androgynous, as in oversized tracksuit bottoms or a white trouser suit with a Givenchy spring 18 logo emblazoned in large silver letters across the front.

The hot pink looks, meanwhile, played with patchwork effects for an edgier feel. A tailored coat morphed into a frilly dress, while a pair of pants had a skirt panel attached to the back.

The section was inspired by the Palestra del Duce, Italian dictator Benito Mussolini’s personal gym designed by architect Luigi Moretti in the Thirties. Technical fabrics were spliced with silk and lace, while tartan stocking boots gave a retro-style slip dress a kinky edge.

Corviale, a Seventies-era housing project located on the outskirts of Rome, set the tone for the closing lineup of workwear-inspired looks, including jumpsuits and parkas rendered alternately in soft cotton or sheer organza. Hot pants, a buckled minidress and plastic boots with Plexiglas heels injected a hedonistic sense of fun.

With its powerful color palette and wide range of styles, this was a transitional collection designed to ensure continuity, while providing Waight Keller with the widest possible canvas to paint her own vision for the brand come fall.

See More From the 2018 Resort Collections:

Redemption Resort 2018: The inspiration for the collection is “aristocratic grunge.”

Rodebjer Resort 2018: The designer offered up a lot of layers to transition from party to street, strict to mildly wild.