Hussein Chalayan led his study on colonialism and its effects on the body, guide the way he draped, cut and layered his latest resort range. 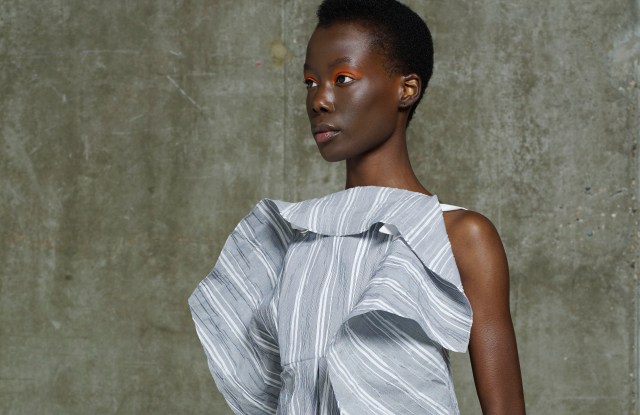 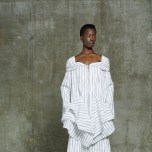 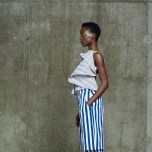 Hussein Chalayan tends to handpick a theme at the start of each pre-collection season and delve deep into it for his pre-, main and men’s wear lines.

“The postcolonial body” was his subject of choice this time, studying how colonization has affected physical behavioral codes.

He focused on regions such as Latin America and Japan, which have been colonized by Western forces, looking at various rituals and in particular dance genres like tango or capoeira, brought in by the colonial powers and being turned into “pursuits of pleasing the white man.”

“I guess I have these ideas that I abstract and learn from. We’re all struck by [the effects of colonization] but we don’t know it,” said the designer, during a collection walk-through. “It’s that idea that we have got so used to pleasing the ‘white man’ or the colonizer which has become part of the norm in our lives. I wanted to look at it through dance and movement, because it’s still an entertaining factor. The idea that you adapt to certain things but at the same time are trying to please the other is an interesting subject. To me it’s another kind of slavery in a way that we take for granted. Ultimately, I’m interested in the abuse of power, how it has an effect on us and how we succumb to it without knowing.”

Here, his intriguing thoughts around colonialism allowed him to keep pushing the envelope when it comes to garment construction and rework some of the brand’s core wardrobe pieces — from tailoring to loose mididresses and shirting — with striking drapes, layers and patterns.

Loose chiffon fabrics were layered over tailored jackets, hinting at how colonial forces quietly masked one’s freedom; light silk dresses featured subtle drapes to evoke the movement of dancing bodies; while when pulling back blazers and tailored pants with cords, Chalayan had colonial restriction in mind.

Other highlights included linen separates that were meant to inspire an “institutional feel,” and printed dresses that featured painterly patterns that fused Japanese and South American traditions.