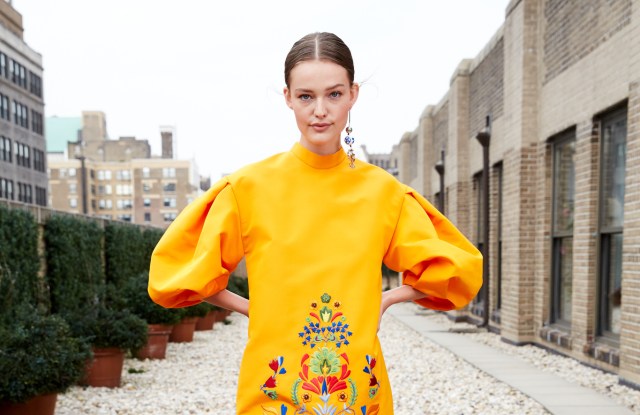 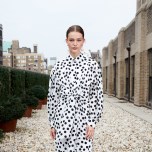 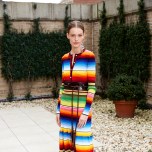 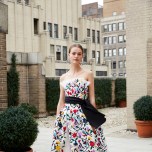 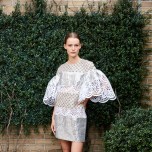 Some designers are rethinking the meaning of “resort,” but not Carolina Herrera’s Wes Gordon. “Resort just embodies what Herrera should be — sunshine, laughter, dancing, fun,” Gordon said during a showroom appointment on Wednesday morning. Heightening his enthusiasm this time around: a recent trip to Mexico City, which he called “the most fantastic city in North America now. It’s like Marrakech and San Francisco crashed together.”

He thus imagined resort as “a Latin holiday,” a motif apparent from the ebullient look of the showroom, decorated with vibrant flowering plants and installed with an inviting display of clothes to feel happy in, by night but also by day.

For the former there were fanciful frothy tulles and a stunner of a strapless organza gown made from a single piece of fabric – selvage at the top, selvage at the bottom, Gordon boasted, and in between, alternating sections of a joyful folkloric print with plain white, which the designer called “shots of emptiness.”

That dress is an example of how Gordon is taking ownership of the brand, retaining the chic and positivity of the house founder, while delivering them with a more casual attitude. To wit, a black tulle ballgown projected classical grace but upon inspection bore logo lace straps spelling out “Carolina Herrera. “ And a little nothing Sixties-ish shift turned into quite something with intense silver and gold embroidery and giant eyelet sleeves. (When she founded her company in 1981, Gordon noted “Mrs. Herrera was known as The Queen of Sleeves.”)

The day clothes were all as inviting. They came feisty in bright, in hot-hued, multicolored stripes and utterly chic, in a buttoned-up black-and-white polka dot shirtdress. Gordon also worked a more obviously youthful side in vibrant floral embroideries on dark denim as well as airy-as-a-breeze full-cut silhouettes in angelic white eyelet. And he took the openwork motif in a different direction, in black leather lace embroidered with posies, for a girl with a wild side who still likes to keep it pretty.