The designer mixed colors and materials making for gowns for every type of resort occasion. 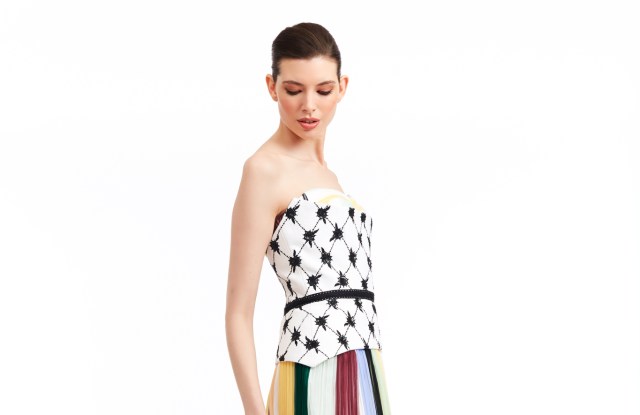 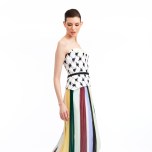 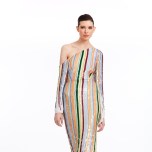 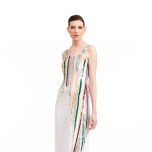 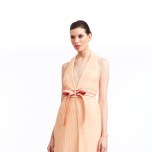 Today, the resort shows are often just a marker of newness on the retail floor and don’t always entail actual going-away clothing, but not so for designer Dennis Basso: His girl is “definitely resorting” as he sees it. For him, in fact, it always begins with the girl — who is she, where is she going?

“For resort I always have our girl on vacation,” Basso said. “Now she is in the tropics. It’s a place where it rains and after you get a gorgeous rainbow in the sky.”

That played out in the clothes with a mix of colors but not so much the in-your-face bright rainbow ones, instead Basso formed his work using softer color tones, like powdery yellows, and creamy peachy and pistachio pastels.

Mixing was a big theme throughout, often in unexpected materials and textiles, such as a colorful striped strapless pleated gown with a white cotton bustier at the top with black flower appliqué. Raffia fringe cascaded in color-blocked sections down a shift dress and other pieces layered beading treatments next to sequins. Many that give his uptown girl some movement and even a touch of a sexy vibe.

Basso showed a mix of fur toppers — possible fur ban be dammed — like a white fur with intarsia candy-colored details that could go over a gown or a sportier fur baseball jacket that could go for a casual look if styled right.

“I think that there will be a meeting of the minds,” he said of the pending law. Adding with a smile, “everybody will be happy in the end.”

Basso did a take on power suiting, too, showing a tweed jacket in white with colorful busts throughout or a peach tweed pant suit with lace details on an asymmetrical hem of the jacket.

“The rules are just not the rules anymore” he quipped of his edited mix of separates that could work in a few settings.

The offering was a tad too evening heavy, but exuberant and something to get you noticed. It’s what one would expect from a designer with a larger than life personality.

“No one is coming to Dennis Basso for a navy blazer,” he said.