Maria Grazia Chiuri paid tribute to the traditions of southern Italy with her elaborate cruise spectacle, held in the center of Lecce. 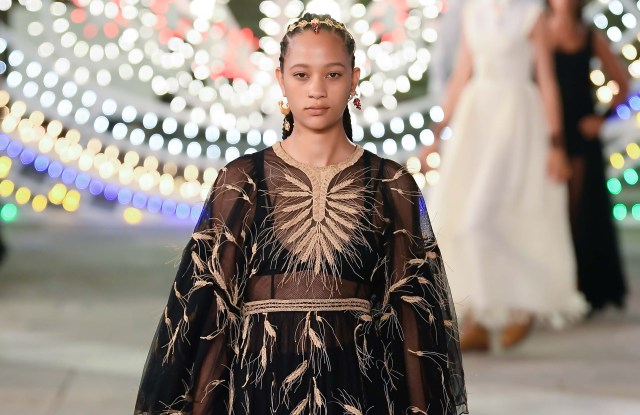 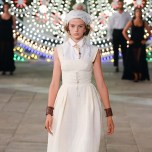 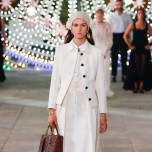 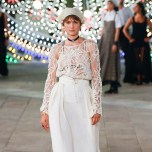 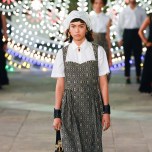 Maria Grazia Chiuri staged an all-singing, all-dancing homage to the rites, traditions and craftsmanship of the southern Italian region of Puglia for her Dior resort show on Wednesday, held in the center of Lecce against a vibrant backdrop of colored light installations.

Models dressed in fringed skirts, headscarves and embroidered dresses walked across the square in front of the Duomo cathedral, a masterpiece of Italian Baroque architecture, to the sound of a live orchestra and haunting chants, while dancers performed a moody choreography by Sharon Eyal.

There was even a post-show concert by popular Italian singer Giuliano Sangiorgi.

The only thing missing was a live audience. Instead, Dior addicts tuned in on their computers at 8:45 p.m. CET and waited for 15 minutes for the show to start. Even the townspeople were barred from what was originally supposed to be a popular celebration, due to ongoing social-distancing rules designed to prevent the spread of the coronavirus.

When Chiuri began working on the line last November, she tapped local artisans for what she billed as her most personal collection yet for Dior.

“For me, it was a dream to do something in a location that is so close to my heritage, because my father was born there. I’ve been going to Puglia my whole life,” she told WWD during a preview in Paris. “I wanted to talk about my background and how that influenced also my point of view in fashion.”

She traced her love of craftsmanship to watching relatives, including her grandmother, making fabrics on their doorsteps. “All the women in the area at the time had a loom at home,” Chiuri said. “It was like making a trip in my memory, and also to understand much more about myself, why I’m so interested in these things.”

When COVID-19 sent Europe into lockdown in March, Dior said it was indefinitely postponing the show in Lecce, initially scheduled for May 9. But the weavers and embroiderers continued to toil away at home, as Chiuri kept drafting in new participants, like composer Paolo Buonvino, via Zoom.

“It was a miracle to complete this collection, honestly,” she said. “We felt it was very important for us to give hope for the future to all the people who were working in some way with us on the project.”

The resulting collection marked a departure for Dior, even by the standards of Chiuri, who has made handmade techniques like tie-dye a signature of her tenure. Here, she married a rustic aesthetic, rooted in tradition and necessity, with the opulence and fantasy of a French couture house.

Dior’s signature Bar jacket was rendered in jute with multicolored ticking stripes, its hourglass waistline loosened. There was a costume-y feel to the fringed apron dresses, made from geometric patterned fabrics traditionally used for the home, though striped short-and-jacket combos felt like a cool way to do a summer suit.

Chiuri said she hoped that by subverting the fabrics in this way, she would inspire the craftspeople to see their work with a fresh eye. “It can help them also to translate that, to use it in a different way for the future, without losing the essence of that tradition,” she noted.

Chiuri worked with two local organizations that are preserving ancient weaving techniques: Tessitura Calabrese and Le Costantine Foundation, whose motto — “Cantando e Amando” (“Singing and Loving”) — was woven into outfits including a cream-colored skirt paired with a cobwebby top and chunky black boots.

A nude dress with 3-D floral embroidery was the work of Marilena Sparasci, one of the last practitioners of the tombolo technique, which harks back to the 15th century.

Pietro Ruffo, who frequently designs prints for Dior, created rich floral patterns inspired by an Italian botanical tome from the 17th century. A poison green dress printed with a psychedelic jumble of wild flowers and wheat sheaves was topped with a striped maxi cardigan, nudging the collection into Seventies territory.

The designer accessorized her earth goddesses with leather corset belts, carved cuff bracelets and elaborate gold hoop earrings — the latter inspired by the Ori di Taranto, a collection of antique jewelry housed at the National Archeological Museum of Taranto.

Earlier this week, Chiuri visited the museum with influencer Chiara Ferragni, who shot videos for the brand and contributed to whipping up excitement among locals. (A marching band was waiting for Ferragni as she exited a church in the town of Galatina.)

Some local papers reported that not everyone was happy with the light installations designed by contemporary artist Marinella Senatore, on the grounds that they obscured the architecture of the square. Chiuri played down the controversy, saying that journalists had blown up the story without knowing the details of the project.

Known for her feminist art, Senatore worked with colored bulbs known as luminarie, traditionally used for religious feasts, and punctuated their swirling motifs with phrases such as “We rise by lifting others” and “Be a builder of unguilt” — continuing a tradition of Chiuri collaborating with female artists on her show sets.

Dior had the backing of the town’s mayor, Carlo Salvemini, and crucially, its archbishop, Michele Seccia, who expressed his support in a video posted to the brand’s Instagram.

“Hosting a fashion show near the Duomo will perhaps raise a few eyebrows, but I confess, in all sincerity, that it is precisely because of the moment we are going through that we need culture and hope for people, in the contemplation of beauty,” Seccia said.

Chiuri said she was moved by the groundswell of solidarity toward the project, which the house has described as a gesture of support not only toward its long chain of suppliers, ranging from large manufacturers to family-owned workshops, but also toward Italy, one of the countries most deeply affected by the COVID-19 outbreak.

“I found really incredible sisterhood and brotherhood for this project. Everybody wanted to participate,” she said, noting that the performances in the show were based on the Pizzica, a folk dance symbolizing a form of catharsis for the mind and body. “They used this dance and music to signify rebirth.”

At times, as the models frayed their way through the dancers, it felt like a lot to take in, and one wished the camera would linger a little longer on the clothes. But as millions remain in lockdown, it’s clear a simple fashion parade is no longer enough: brands must provide a more global form of entertainment.

As the models stood still for their final bow, Chiuri’s message pulled into focus: these powerful women symbolized resilience. Here’s to new beginnings.