The collection was centered around tailoring and revealing process. 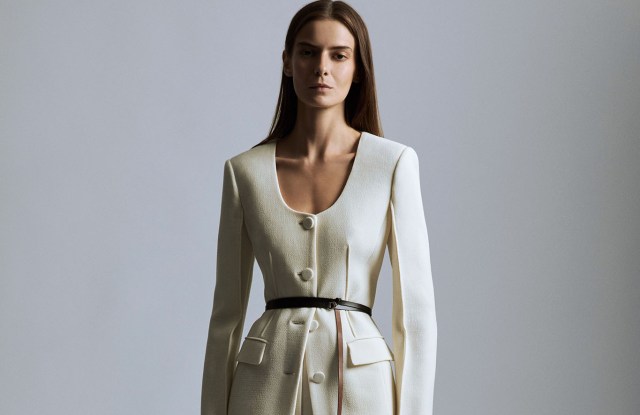 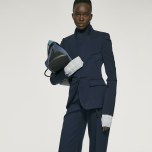 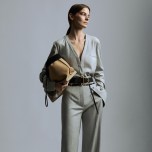 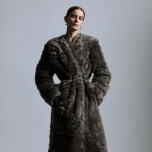 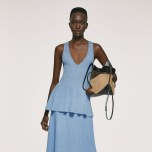 Joseph Altuzarra’s resort collection was all about process. Revealing construction applications such as darting and crease lines were key to the designer’s goal of transparency and, ultimately, clothes underscored by an element of intimacy. “I became really interested in not trying to hide the fact that we were modifying these pieces,” Altuzarra said on a call. Pieces that appeared unfettered at first glance showed considerable thought upon closer examination, paving the way for new takes on Altuzarra staples.

The idea of new tailoring was an overarching theme, an evolution, if you’ll recall, from his fall show. He took a couple of approaches here: first, with tailoring that revealed process through subtle deconstruction or assembly; second, through hybrid designs.

From the former, he displayed finishings like darted markings on the shoulder and bust of a navy suit, or crease lines that were top stitched on a cool gray culottes look to appear folded. A standout white jacket in stretch wool crepe was the result of taking the collar off and scooping out the neckline to feel like a relaxed cardigan. Hybrid highlights included an easy gray jacket with the appearance of a shirt in a flannel fabric with matching pants, and a charcoal cardigan-suit jacket notable for its balance of informality and polish.

Ease was the point of difference here from previous tailoring — stemming from new considerations women have factored in during quarantine — and extended to mohair coats with raw edges, a shearling coat spliced with knitwear and a leather shirtdress with knit sleeves that were all cut with lightness and movement.

Elsewhere, Altuzarra balanced tailoring with familiar tropes of femininity through gingham, florals and ikat patterns that he altered and manipulated for visual interest. A variety of very pretty dresses featured ikat florals that were almost disintegrating and a trompe l’oeil design of folded fabric. A gingham he resurrected from spring 2015 was piled up in three-piece looks consisting of a bra, cardigan and skirt set, a concept that reconsidered what evening is today when done in a yarn with fine metallic sequins, and exemplified an ideal blend of versatility and ease for these uncertain times ahead.