Forced to cancel its planned cruise show in Capri in May, Chanel brought Capri to Paris for its digital presentation of the collection. 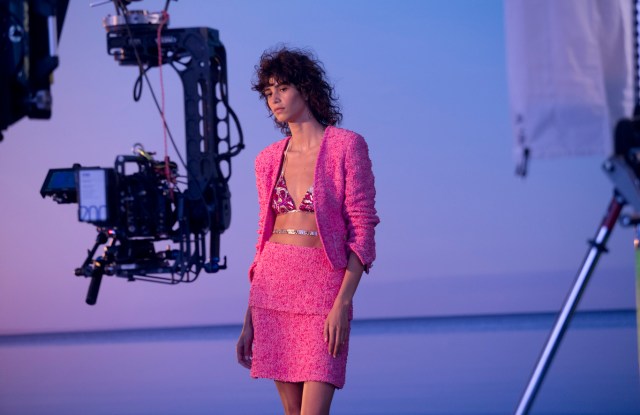 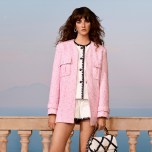 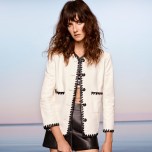 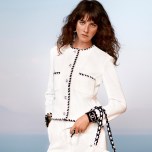 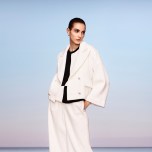 Chanel had planned to take guests to Capri to show its cruise collection on May 7. With its plans scuppered by the coronavirus pandemic, the brand decided to bring Capri to Paris instead, re-creating a Mediterranean pebbled beach in a studio on Rue Cambon for its digital unveiling of the line today.

Model Mica Argañaraz, wearing a pink tweed suit and a sequined bikini top, strolled in front of a pastel sunset backdrop as a wind machine gently fluffed her shag of dark curls during the video shoot last week. In parallel, photographer Karim Sadli photographed the looks in a separate location drenched in simulated golden sunlight.

“We could have re-edited a small book of his photographs, done a little exhibition. It would have been neat. I like having something that links back to him,” said the media-shy designer, conducting her first round of press previews since Lagerfeld died in February 2019.

It’s the first time in its history that Chanel has presented a collection without staging a show, said Bruno Pavlovsky, president of fashion and president of Chanel SAS. “It’s a new way of presenting,” he said of the images and videos that were rolled out at midday on Monday on Chanel’s web site and social media platforms.

“We’re sorry we couldn’t do a show, but the conditions didn’t allow it. But I hope we can return to the runway in October, whether it’s behind closed doors or with a small audience. A fashion show is still the best way to narrate a collection, and it’s very important for us in stores afterward, because it’s the beginning of the story,” he said.

Whereas under Lagerfeld the Chanel atelier would have been thronging with editors, assistants and friends during the final fittings for the show, Viard — wearing a face mask — respected social distancing rules by holding one-to-one appointments flanked only by two p.r. officials.

Having spent most of the lockdown period in the French countryside, the designer returned to the studio on May 4 and pulled together the cruise collection with her team in three weeks.

“It was always going to be a light and fairly small show, like someone going on vacation in Capri: elegant and sophisticated, but perhaps simpler, pairing a jacket from a previous collection with something new,” she said. “If you have something you like from Chanel, it always works. You don’t need to always buy something new.”

The designer has steeped her recent collections in French New Wave cinema references, and the image of Brigitte Bardot sunbathing naked on the roof of Villa Malaparte in Godard’s movie played straight into that. “The references are always the same: holidays, actresses,” she said. “It’s charming, sexy, easy and refined.”

Models flaunted bare midriffs accented with tight chains — clearly, no lockdown bingeing here. “There are those that eat cake, but not us,” Viard said jokingly. Black bikini tops were worn with everything from an asymmetric striped knit skirt, to black Capri pants and a black chiffon shirt, underscoring the casual attitude of the line.

Necessity being the mother of invention, Viard worked with the materials available following the reopening of most factories in mid-April. “We reused everything we had: all the leftover buttons and thread. We made the knits with yarns we had in stock. That saved us time,” she said.

She also cherry-picked items from previous collections to give them a second life. Flared jeans were customized with panels of cotton fabric printed with a camellia motif; shirts were dyed in salmon and pink, and colorful tweed jackets were paired with jeans featuring matching fabric accents.

“We’re trying to make it simple for everyone,” she said, noting factories would be able to work with existing fabric stocks. “It’s very moving and reassuring to know that we’re not going to drop anyone and that we’re taking care of all the manufacturers, because a factory can quickly close. That’s another reason I’m happy to be back.”

In addition, 14 of the 51 looks were made with sustainable silk and cotton that have won the GOTS (Global Organic Textile Standard) certification, which defines high-level environmental criteria along the entire organic textiles supply chain and requires compliance with social criteria as well.

Pavlovsky said it was part of the brand’s ongoing commitment to sustainability, which began with its decision in 2018 to halt the use of exotic skins and has gained steam with the recent publication of a set of goals known as Chanel Mission 1.5, aimed at tackling climate change.

He noted the traceability pledge went beyond the requirements of the Fashion Pact launched by Kering in 2019, which Chanel signed alongside dozens of other industry players.

“This year, between 20 percent and 30 percent of our fabrics will be environmentally responsible, and our goal is to increase this in the medium-term,” the executive said. “Within two or three years, I hope we will be able to offer to our customers complete collections that reflect all our commitments.”

While it didn’t break the mold, the collection ticked the right boxes, and should provide some much-needed continuity for Chanel customers looking to refresh their holiday wardrobes — and possibly burnish their green credentials in the process.