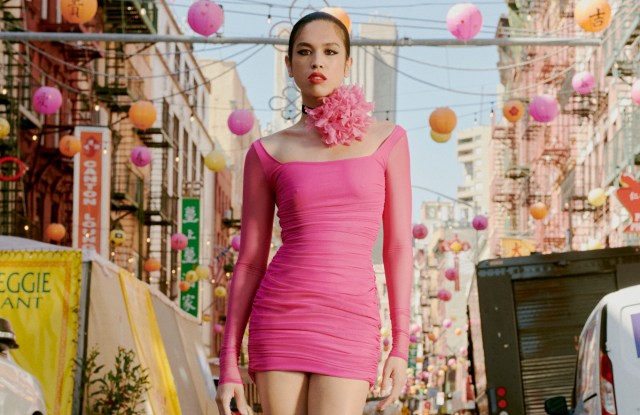 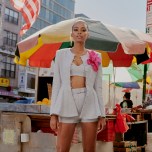 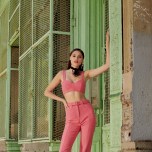 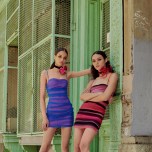 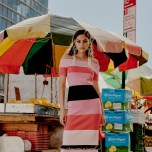 Clothes designed to be taken off? Prabal Gurung has ’em in his resort 2022 collection, an ode to liberation in all forms as is his way — including of the pent-up, post-pandemic sexual sort.

Short, tight, traffic-stopping minidresses in a new sustainable stretch tulle; tropical floral-patterned bra tops and sky-high slit ruffle skirts; and a smoking-hot pink sequin cutout cleavage gown begging for a red carpet are just a few of the tools of seduction in the collection, which Gurung photographed in the festive lantern-strung streets of New York’s Chinatown.

“So many people are jonesing to go out!” the designer said of his peer group looking to party and hook up. He gave them plenty to get excited over, extending hot girl summer to holiday with corset-detailed upcycled lace dresses, and floaty chiffon styles with his signature fabric-covered buttoned waist cutouts. A pink, feather-trimmed sari-inspired gown was a gorgeous option for those who want to leave a little more to the imagination.

Case in point: He wanted to shoot the look book in Chinatown, he said, to bring attention to a neighborhood that is sometimes forgotten in the context of New York glamour. “I want to normalize our existence, because we are not just here during heritage months,” said the Nepali designer, who has been vocal in recent months about the rise in hate crimes against Asian Americans.

It was also a trip down memory lane. When he started out in fashion working for Geoffrey Beene, Gurung lived on Mulberry Street where he recalled spending hours slurping dumplings and dreaming of starting his own line, which he did in 2009.

Gurung has been dressing Madame Vice President Kamala Harris a lot in recent weeks, including for the State of the Union, and as a result tailoring is becoming a bigger part of his business, he said. Who knows if she would ever wear his sultry black peplum tuxedo with sequin-embroidered lapels, but we’d love to see it.