Women's featured a post-pandemic reverie of proportion and pattern play, while for men's, the designer said he has "zero interest in designing a collection that is casual." 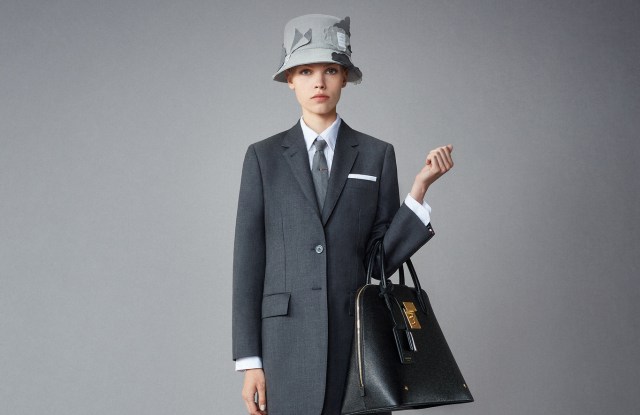 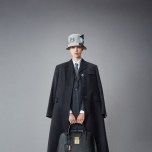 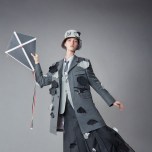 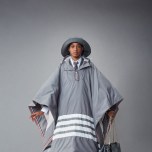 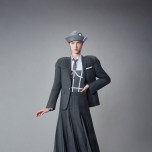 Clearly the Korean-American actor made an impression on Browne, whose women’s resort collection is a post-pandemic reverie of proportion and pattern play with built-out boss shoulders, sporty layering and whimsical extras including kite embroideries, propeller hats and Hector the doggie bag sprouting airplane wings.

Being jaded is so over.

“It’s nice to remember the innocence of childhood,” said Browne, while making clear that light and fun don’t mean not making an effort. “Dressing down is nothing I’m interested in doing,” he said.

The former Catholic schoolboy who made shrunken suits a signature does love a total look, but there was also a looser sensibility to how he approached this resort season, signaling his ever-growing brand universe and how customers are making it their own.

“I love people seeing it exactly the way I see it, but I also love when people have their own take,” he said. “I like to lead people to the pool and have them dive in however they want to dive in.”

So he layered cuffed checked trousers under pleated skirts; gingham tights under “obnoxiously short” minis, and longer, looser sports coats over bias-cut skirts or dresses. There was even a bare midriff revealed under a cropped sports coat and trouser skirt look worn with playful mismatched socks and heeled boat shoes.

While pushing new proportions, including those muscular, fabric-wrapped power sleeves, he kept things grounded in the easy fabric of American sportswear, working in familiar madras checks, seersucker and denim. (A denim suit with crisp-cuffed trousers, sport coat and overcoat, all with raw edge detailing, was fabulous; he should do more in American true blue.)

Special embroideries and intarsias included clouds, airplanes and kites rendered with a childlike hand. And accessories — a category that is “growing exponentially,” he said — included several structured bags, from a saddle shape to a kite clutch with ribbon tail.

Lightly padded puffers, mariner jackets and trenchcoats with released pleats rounded out the strong outerwear offerings, along with the designer’s first ponchos — a last minute addition to the collection inspired by a woman he spotted on the street during his commute. A knit version in particular — in navy-and-white cable with cloud and racquet details — suggested another category Browne could easily make his own: bedding and home.

In addition to adding new categories, the interplay between his men’s and women’s collections, which WWD photographed together, has been creatively invigorating to Browne.

“I’m not consciously blurring the lines, but it seems subconsciously like it’s happening in such an easy, organic and authentic way. It just feels like that’s what should happen now. It’s almost like seasons have ceased to exist, and there is something charming about gendered clothing not existing either. I think it’s very interesting in the evolution of how people look at clothes, and also, it looks really good.” — Booth Moore

Men in monochromatic plaid miniskirts and tights might be a reach for a lot of designers. But Thom Browne is not just any designer.

The result was an offering that was both familiar and fresh. “I still see references to the suit I made 20 years ago,” Browne said of the skinny gray suits that put him on the map two decades ago, adding: “It’s really important to me to show how the collection has evolved.”

Browne continued: “Over the past three or four years, I’ve been exploring the idea of putting men in stereotypically women’s clothes. It has become normal to me. There are almost as many skirts and dresses as trousers in this collection. It just feels natural and right and authentic to the collection.”

Although the silhouettes may blur the lines of gender, Browne stuck to more traditional fabrics such as gingham, madras plaid, seersucker, intarsias and cotton-linen blends. He said he uses the fabrics as “a tool” to allow the collection to be “provocative. They’re all based on really classic patterns. That’s the way I like to ground these ideas.”

But they also speak to his appreciation for true American sportswear, and by using them in more-tailored garments, Browne is able to morph formal and casualwear in a unique way.

“I have zero interest in designing a collection that is casual,” he said. “The idea of casual clothes is just not that interesting.”

Instead, he seeks to offer up a new take on tailoring that blends the two. This attitude also illustrates how Browne is thinking right now. “It’s a story of my fighting the idea that everything has to be so dressed down,” he said.

But while the collection was dressy, it was still playful, with propellers on hats and bags in the shape of airplanes — along with his signature Dachshund bags, some of which were stretched out or shrunken down this time around.

He also played with proportions in some of the apparel pieces, such as the “obnoxiously short skirts” and oversize ponchos. He offered up a wide variety of hats, from buckets to top hats. Although Browne’s hats started out as mere conceptual accessories for his shows, they’ve since become a decent business for the brand. “We have a fairly good hat business in our stores,” he said.

He also designed some interesting shoes, including a duck boot, rubber rain boot and a hiking shoe based on the idea of an old cross-country ski boot, he said.

All told, the lineup hit all the marks of a Thom Browne collection. And although it won’t be shown on the runway this time, the designer said the plan is to show men’s and women’s together during New York Fashion Week in September before taking the men’s back to Paris in January.

“We’re going to be physical in Paris in January,” he said, adding that he was thrilled to be able to travel to Europe to create this collection. “One of the best things was to be able to go to Europe to see it, shoot it, live it in person,” he said. “The idea of our lives coming back is so refreshing and I wanted this collection to feel the same way.” — Jean E. Palmieri and Alex Badia