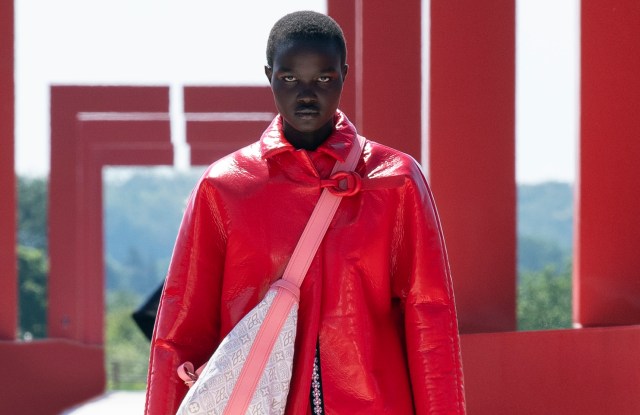 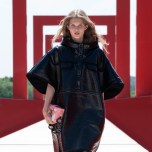 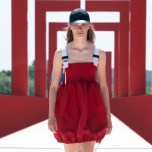 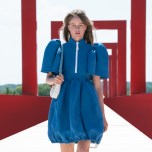 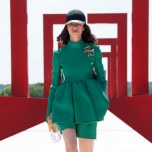 Imagine a long, red bridge canopied with angular arches set against a cloud-dappled blue sky, and a fleet of young women striding confidently over it, their low-heeled boots as colorful as flags.

As it’s June, it could be a Pride march, but it was in fact Louis Vuitton’s cruise 2022 show, which transmitted the same jubilant energy, along with a sense of pageantry — and a gust of fashion daring.

“It’s this expression of enthusiasm,” said Nicolas Ghesquière, who let loose with juicy colors, rich jacquards, snappy ’60s shapes and a slew of references to space conquest, a treasured theme for the French designer — and perhaps the final frontier for a company like Vuitton, its roots in travel since 1854.

Ghesquière has known about the show setting on the outskirts of Paris, a monumental installation by the late Israeli sculptor Dani Karavan known as Axe Majeur, for at least half a dozen years.

“Sometimes, exoticism is not that far away from us,” he said, flashing a smile over a Zoom call from his country home.

Indeed, the retro-futuristic bridge at the center of the vast, park-like complex, built in 1989, evokes for Ghesquière “the ‘Stargate’ concept. Today we can imagine a portal to somewhere else.” Or in the near future, we could be gettin’ the hell outta Dodge on a Blue Origin or SpaceX rocket.

Both are dreamy propositions, and allowed Ghesquière to indulge in striking prints of lunar landscapes on roomy coats and dresses — appointing these imaginary planets with basketball courts, parking lots, escalators and other humanizing touches — and graphic, military-like ensembles for high-fashion space cadets. Other looks reflected the sheen of the Space Age fashion era, like the glossy red coat that opened the show or the tidy coatdresses and mini capes with neat rows of buttons.

The collection was bold in its mixes of textures and prints, which could be overwhelming, especially when patterned pants were tucked into those flag-like boots.

Ghesquière’s collections are rarely rooted in a single time period or based on easy, familiar references, which makes them hard to categorize and challenging to the eye. He name-checked French photographer Charles Fréger, who documents the uniforms worn by various communities, from athletes and majorettes to women in Brittany, yet it was hard to draw direct lines between his photos and these intensely detailed clothes.

But then again, cruise collections, which hang in stores for longer than any other, are complex, “chameleon” collections that straddle several seasons and must make a strong fashion statement while at the same time mixing with other deliveries, according to the designer.

His cruise show reached a crescendo as models ascended a mount and strode amid towering concrete pillars, their outfits sprouting feathers, and accruing sparkling embellishments and fluttering sleeves in glazed jersey. The last model, wearing a handsome white admiral’s jacket with futuristic airs, paused to let the wind tousle her hair as she looked beyond the sculpture park and past the Paris skyline to outer space itself.