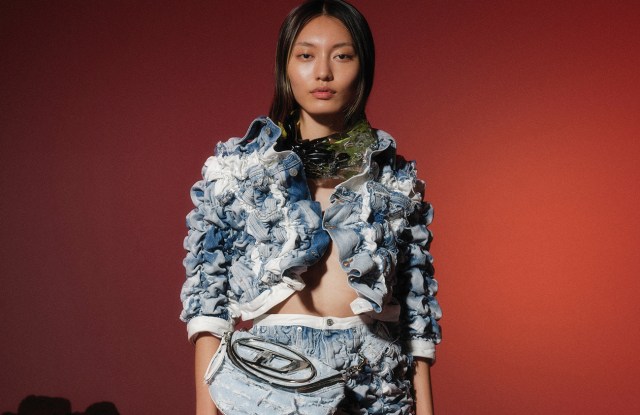 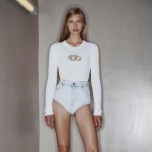 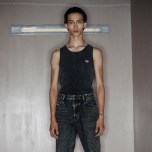 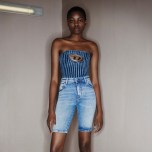 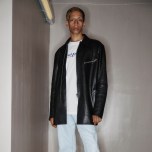 For his official debut at the helm of Diesel, creative director Glenn Martens looked at nothing other than the brand itself.

“Diesel is about the successful living, owning your life, being fun, ironic and it’s also about a touch of sexiness,” said the designer, summing up in a few words the spirit of his collection.

While Diesel offers a wide commercial lineup, Martens showed at Milan Fashion Week a coed runway collection that felt creative, frisky and unapologetic, all qualities that it’s easy to associate with the Italian brand.

The lineup was unveiled via an engaging short movie, which featured a gaming-like vibe. The protagonist is a girl dressed in an outfit that probably summarized the soul of the Diesel brand: a pair of baggy jeans with incorporated high-heel boots worn with a deconstructed white T-shirt featuring an intertwined belt.

Her flame red bob reminded one of a modern Milla Jovovich in the 1997 film “The Fifth Element,” and she is portrayed living a dream-like, utopian adventure through different scenarios. She goes from a college-like home party to the city streets, where she runs surrounded by a range of models. At one point she gets into an elevator that becomes a catwalk for an impromptu runway show, before landing on a red planet with a suspended atmosphere.

While her look doesn’t change, the models around her sport the breadth of designs — the lineup included 80 looks — designed by Martens.

Embracing an ironic attitude, the designer played with denim and streetwear essentials that he revisited through a sometimes sexy, sometimes surreal, always eye-catching filter. For example, if jersey pieces, coats, pants and shirts were printed with digital images of vintage Diesel garments, other tops and accessories featured the original metallic Diesel logo, introduced by the brand’s founder Renzo Rosso in the ’80s.

Martens’ renewed passion for manipulating silhouettes translated into a range of asymmetric designs where fabrics were twisted, draped and used inside out. Denim was also quilted to create fun separates that offered an ironic interpretation of the bourgeois style, while Swarovski crystals created argyle motifs on maxi zippered coats matched with coordinated pants.

In keeping with his experimental attitude, but also with Diesel’s commitment to sustainability, Martens introduced upcycled garments. They spanned from charming bombers crafted from interwoven straps of deadstock materials to a range of flamboyant and dramatic smocked organza styles.

The debut demonstrated the versatility of Martens’ creative approach. He was able to adapt the conceptual design he  showcases at Y/Project to a different context — one more fun and democratic, just like the Diesel brand.