Chivalry is not dead, if EgonLab has anything to do with it. 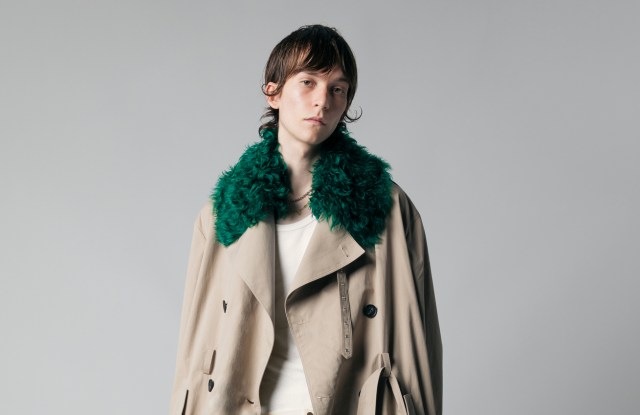 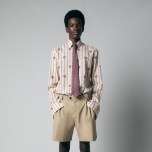 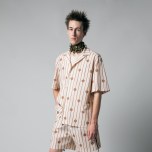 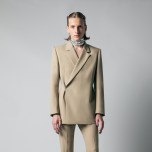 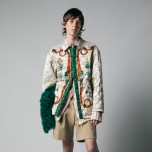 Florentin Glémarec and Kévin Nompeix put their irreverent, inclusive spin on heritage with their EgonLab Dynasty collection for spring, an upbeat lineup that referenced the mood of the moment and a sense of acting together for the common good, they said during a preview.

Their mix of sporty and tailored silhouettes was peppered with chivalric references — including a hand-painted jute shopper complete with a sword attached. (On an everyday basis, its loop fastenings would serve just as well for carrying home your baguette, Nompeix pointed out.)

A quilted jacket, a house signature, had a high-shine surface and printed motifs reminiscent of illuminated manuscripts. The medieval imagery was carried over onto one of the standouts in the collection, a jacquard trenchcoat featuring the Archangel Michael, symbolic of breaking negative links between past and present, the designers explained. The fabric had been sourced from a small-scale producer as EgonLab seeks to support artisanal crafts. In the same vein, guipure collars and appliqués, on a wide-shouldered forest green suit and black denim jacket, respectively, were made by hand by a “grandma” in Italy.

These were juxtaposed with sportswear made from recycled fabrics and hardware from the duo’s collaboration with Sergio Tacchini, now in its third season, and fun jewelry items like rings set with burgundy crystals to be worn on the fingertips like claws. There was also a chain belt adorned with souvenir spoons collected by Glémarec’s grandparents over the years, another nod to heritage that summed up the label’s quirky stance.

Presented like a runway show, their video nodded to upcoming projects. The pair plan to stage their first real-life catwalk event in January. The final look was a striking tartan corset dress, a one-off piece intended to lay the land for another new venture, the opening of a demi-couture studio planned for next year.