In a garden presentation at Ladurée SoHo, Delphine Manivet showed a gorgeous collection that took its cues from her native France in the 17th and 19th centuries. 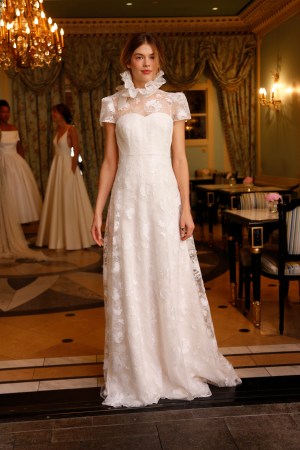 In a garden presentation at Ladurée SoHo, Delphine Manivet showed a gorgeous collection of gowns that took its cues from France in the 17th and 19th centuries. The lighter-than-air lineup served as a tribute to two French women in particular — actress Madeleine Lambert and author Laure Junot, Duchess d’Arbantès — both of whom lived in Manivet’s Paris-based showroom on Rue Boissy-d’Anglas centuries before she took over, as she discovered after a bit of research.

Marked by sheer transparencies and voluminous crinolines, the collection’s softly feminine spirit was captured, and perfectly executed, in a long-sleeve, polka-dotted sheer chiffon gown with billowing sleeves and a lace-up neckline. Most of the silhouettes, done in diaphanous silk and lace, were fluid and unstructured. One pale blue sheer tulle ball skirt — paired with a simple knit top — seemed seemed to float like a cloud. Adding to the romantic mood: One of her models, clad in a charming three-quarter length ballgown, serenaded guests with a cello.