For her debut runway show in the U.S., the South American designer sent out 17 styles named after women who inspired her throughout her life. 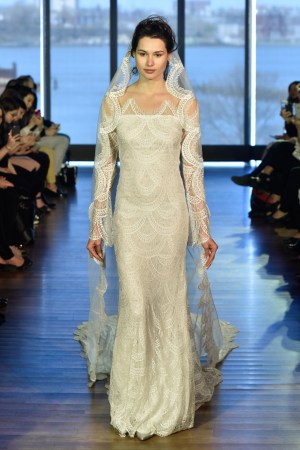 For her debut runway show in the U.S., South American designer Francesca Miranda sent out 17 styles, designed with the help of Colombian artisans and named after women who have inspired her throughout her life. Case in point: the “Jackie” dress, a floral-embroidered, strapless ballgown with a cutaway hemline that paid homage to Jacqueline Kennedy Onassis. Though on the traditional side, it was a highlight of the collection.

Most of Miranda’s looks, rendered in airy sheer-embroidered lace and shimmering silk organza, seemed well-suited for destination weddings. Take, for example, a playful, sheer chiffon polka-dot empire-waist gown; worn with flat espadrilles, it was a smart choice for an unfussy beach ceremony.