It was fun. It was also an ode to Amy Winehouse. 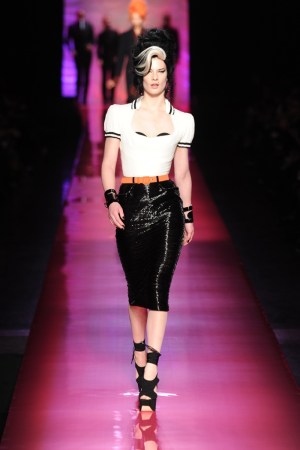 It was fun. It was also an ode to Amy Winehouse, which made for a peculiar motif. The girls wore big, swirling beehive wigs and ultrathick cat-eye eye liner. They strutted in looks that boasted names from Winehouse’s lyrics, including “No, no, no,” “A taste of you,” and “Stronger than me,” while a live a capella quartet sang “Rehab.” For the finale, the girls stripped down to various states of corsetry, many now wearing black veils, before Gaultier did his usual high-energy spring toward the cameras.

Unlike Alexander McQueen’s sober, soulful runway tribute to his friend Isabella Blow, this felt at best ill-advised: a young woman who died tragically less than a year ago the fodder for an oh-so-feisty fashion show. Such, however, was not the intent. “I think Amy Winehouse was truly a fashion icon,” Gaultier said, adding that he felt compelled to celebrate her style because magazines have failed to do so.

Whatever one’s take on the motif, the clothes — though amply tricked-out and tarted-up — were most often beautiful, cut with all the grandeur and detail that are Gaultier hallmarks. Endless curvature was styled in the sexy secretary genre; one skirt paired with a shrunken polo top. Also in the sports vernacular, he turned the bulky baseball jacket into a red-and-white leather hourglass. The tailoring was typically superb, whether in a loose coat and slit-front silk skirt over a frothy slip or smokings that morphed into studies of asymmetric chic.

Throughout, Gaultier worked his signatures to full force — the tweaked trenches, the endless corsetry, the audacious way with color. Evening was something of a costume parade, with looks that would suit a range of characters from Scheherazade to wayward ingenue.