Karl Lagerfeld enthralled his audience with a masterful collection, one that hit that high mark of haute, the glorious fusion of lavishness and chic. 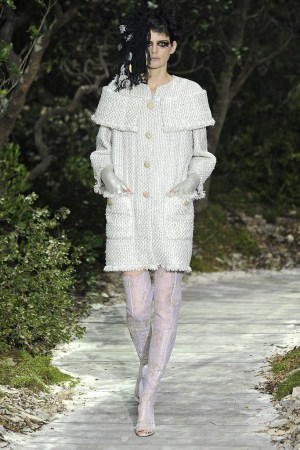 Unseen birds sang welcome in the dense forest of oak trees and pines, their moody majesty enclosed within the glass and steel might of the Grand Palais. Wide plank steps led to the circular amphitheater within. It would have made the perfect setting for a performance of its inspiration, “A Midsummer Night’s Dream.” But who needs Shakespeare with Karl Lagerfeld in the wings? The Bard de la Mode enthralled his audience with a masterful Chanel collection, one that hit that high mark of haute, the glorious fusion of lavishness and chic.

If the setup sounds romantic, so it was, with an undercurrent of mystery. The models wore piles of falling chiffon leaves in their hair, their eyes encircled with dramatic feathered lashes. And within the theatrics, Lagerfeld presented a clear, almost clinical fashion message: framed shoulders. This showed up in various treatments, most involving neat, structured capelets that created volume without bulk. He opened with tailored looks, including an exquisite group of pale ribbon tweeds and a black dress with an embroidered sequined yoke and collar, for a mock-layered effect. This proved to be a recurring theme. “It brings light to the face,” Lagerfeld said.

Specific though the shoulder focus was, Lagerfeld seemed not at all hampered by it. Rather, he made his lineup plenty diverse. Most day looks — including some exquisite ribbon tweeds — were short with volume to the skirts, but then out came a linear trio with skirts falling to midcalf. Either way, they looked great over thigh-high boots in lace, tweed and other fabrics with black seams up the back. As an alternative to waisted looks: two black-and-silver cloque shifts with a soupcon of Courrèges.

Evening was triumphant. Lagerfeld worked the shoulder shtick variously as floral fluffs on sleeves, a scalloped horizontal line in navy lace against a white underpinning: a flurry of white feathers atop a black sheath. There were billowing otherworldly confections and structured looks in remarkable floral embroideries intended to look like prints, such was the density and precision of the work.

The finale looked like the stuff of a provocative fairy tale — one perhaps tinged with a political statement from the self-proclaimed apolitical Lagerfeld. Ethereal met edge in a pair of cutaway feathered beauties, one pink, one dusty green, worn with black leather gauntlets and boots. And then out came twin brides, delicate and diaphanous in aged white gowns, the adorable Hudson (Lagerfeld’s godson) cast as their son-cum-ring bearer. This, as gay marriage, is debated fiercely in France right now. As they’ve long said in the theater, probably back to Shakespeare’s day, timing is everything. Timing, and a great dress.