At the collection’s best, unfettered (though not always simple) charm prevailed. 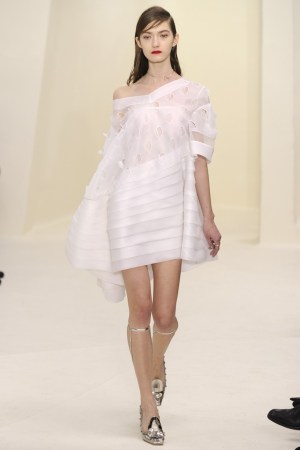 Intimacy. Reality. Those words figured prominently in a conversation with Raf Simons before he showed his Christian Dior haute couture collection on Monday afternoon. “I was thinking about taking the theatrical out and taking it more into reality,” Simons said. “As a designer, you have a responsibility to do both — to trigger her fantasy with the show, but give her the reality as well.”

That’s another way of saying that couture should feel modern — or, perhaps useful is a better word — without sacrificing the craft and quality essential to the genre, a way of saying that deliriously rich women need clothes that function, too. It’s a point Simons has striven to incorporate into the Dior vernacular (ever so stealthily at first) for several seasons. He’s a modernist at heart.

Simons described this show as honoring the connection between the women who make the clothes, the gifted artisans of the Dior atelier, and the women for whom they work, the clients. He sees that connection as one of intimacy, here expressed in a mood of graceful calm. Simons showed within a meandering “salon” — a curvaceous white enclave described in the show notes as “a radical female gesture,” though it looked like a Sixties Space Age girl cave — and not accidentally.

At the collection’s best, unfettered (though not always simple) charm prevailed. This swung archival Dior in relaxed takes on the Bar jacket and, more surprisingly, Courrèges/Paco Rabanne in trapeze shifts. Yet Simons eschewed his inspirations’ typical structure for softness, cutting light fabrics in clean, breezy shapes. His primary decorative motif: repetitive patterns — circle, eye, heart — embroidered onto the fabric, half of each shape cut out and often sewn with jewels for a 3-D effect.

The tone-on-tone graphics in white, black and navy looked lovely, and particularly fresh in white. Cases in point: the show opener, an asymmetric A-line affair that countered circles on top with horizontal pleats on the bottom; a strapless wisp of a dress done up with feathers and a half-hem flounce.

As a change of pace, Simons made a case for chic tailored jumpsuits and matching trouser-and-top ensembles. Another real world nod (of sorts): the embellished couture sneaker, a tony shodding option that will make at least one more appearance this season, at Chanel.

Though much of the collection played beautifully into the concept of haute reality, it was not without difficulty. That’s because Simons hedged his bets. While an embroidered blue-and-white party dress with off-kilter half-apron read as genuine, other dresses featured retro appendages — overlays, poufs, peplums — that felt antithetical to Simons’ primary message. As his audience waits and longs for that full-on, riveting Simons-dazzles-for-Dior blockbuster à la his last several seasons at Jil Sander, he seems more reticent now than then, unwilling as yet to make so definitive and unwavering a statement.