The designers' couture show was like a music box come to life. 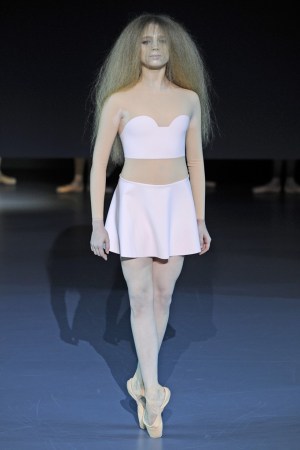 Viktor Horsting and Rolf Snoeren’s couture show was like a music box come to life.

(Spoiler alert: It was also — at least for beauty editors in the know, flown in for the spectacle by L’Oréal — a fragrance ad come to life, with a banner unfurling at the end unveiling Bonbon, the house’s new women’s scent.)

“We wanted something very, very free and sweet but with an edge,” Snoeren said during a preview. “We wanted to treat Latex as something soft, which it isn’t.”

Their hair frizzed into face-obscuring curtains, the young dancers looked otherworldly walking en pointe in short dresses that, but for fluttering scarf-point hems and built-in bra tops, looked spray-painted on their lithe torsos.

Ribbons, ruffles, swallows and butterflies — hand-painted on the Latex to resemble tattoos — added a sweetly surreal touch, especially when the birds were positioned hoisting a swag or drape in their beaks.

Creating the body-hugging shapes with few visible seams pushed the designers’ Amsterdam atelier to the limit. The seamstresses managed to tame the rubbery fabric and fashion it into pert polo shirts that were embedded in the dresses, and a striking, drape-fronted blazer complete with buttoning cuffs.

Snoeren and Horsting said they got the idea for the collection, their second following a 13-year absence from couture, while shooting the Bonbon ad with photographers Inez van Lamsweerde and Vinoodh Matadin. It depicts model Edita Vilkeviciute, who attended show, wrapped in ribbons painted on her otherwise nude body.

Guests were handed a bright pink goodie bag as they exited, a reminder that couture imagery feeds the dream that fuels perfume sales.

If the commerce tainted the artistry, take heart: Horsting and Snoeren have been tapped by the Dutch National Ballet to costume a new work by Finnish choreographer Jorma Elo that make its debut in April.