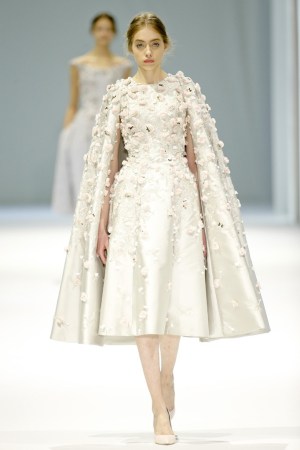 Like so many couturiers this season, Tamara Ralph decided to say it with flowers, seeding her sculpted Fifties party dresses and filmy gowns with glossy embroideries of vines and blooms, or full-on 3-D petals and other glittery encrustations. The bride lurched forward to propel her weighty train laden with pearls, crystals and metallic threads. Four burly attendants helped her swivel and reverse down the catwalk.

This British couture house has little to prove in terms of finesse and high craft, which adds some distinction to Ralph’s demure, retro shapes. Stiff cocktail dresses sprouted multiple peplums, arch Watteau backs or whorled volumes around the hips. A dramatic silk cape drifted from a simple, off-the-shoulder lace column.

While some exits winked to Dolce & Gabbana and John Galliano-era Dior, what registered was the glamour of Old Hollywood — the kind projected by Dita Von Teese, who took her seat in a curvy red cocktail suit while the show was already underway. Lately, the label has been a magnet for the likes of Angelina Jolie, Beyoncé and Eva Longoria, the kind of exposure Ralph and her partner Michael Russo must surely lap up as they strive to become a major luxury house.