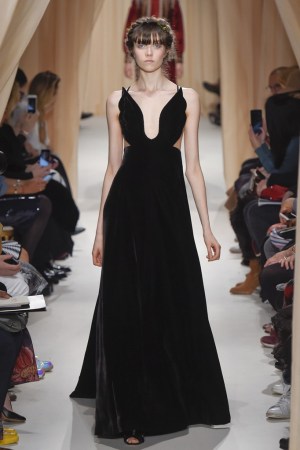 Love is all that Maria Grazia Chiuri and Pierpaolo Piccioli can give to you. Love and folkloric charm, exquisite embroideries, rustic base fabrics, Juliet gowns, angel-wing bodices, a shearling corset to “protect the heart,” Italian pop songs and a line or two of Dante. All delivered with haute toniness and funneled through an homage to Marc Chagall, who lived a Russian country life before becoming a French citizen, and who, Piccioli noted backstage, as a French Jew stayed remarkably positive during World War II.

Got it? No matter. That’s one of the splendored things about fashion, which, like love, has many. Those of us unskilled in assembling a reference — and a symbol-heavy mental collage into a visual tale of coherence and chic — can sit back and enjoy the couturiers’ work. In the Valentino collection they showed on Wednesday evening to close the spring 2015 season, Chiuri and Piccioli delivered a gem. They’ve built something very special, more or less reinventing the house while neither alienating its founder nor rejecting his codes, a fact brought into sharp focus by the all-white collection they showed in New York just a month or so ago. For spring, their now-signature romance swung folkloric, inspired by Chagall’s Russian country life, and came in graphically embroidered linens and muslins worn in modest layers, apron dresses over blouses, long wool capes over jeweled muslin linen and hopsack. These bore an appealing heaviness.

The designers knew when to say when with the decoration, offering interludes of plain — as in an unadorned gown in blue velvet on muslin. And they lightened up with a series of ethereal embroidered gowns. Exquisite in the vacuum of couture, these resonated with particular strength as the Oscars near. While it would be divine to see an actress work one of the more covered-up looks, it’s unlikely that Rosamund Pike or Keira Knightley will opt for a long-sleeved natural linen dress that might have been perfect for a medieval shepherdess on prom night (meant as a compliment to the dress.) But Chiuri and Piccioli proved that revealing has a range beyond mundane to vulgar. Their full-skirted beauties were embroidered with abstract motifs and heavenly clouds and poetic script. The simplest among them, with a linen corset atop a dusty tulle skirt, bore the single line “Amor Vincit Omnia.” Love conquers all. That Virgil, he really understood the passions triggered by a great dress.