For her Dior couture debut, Maria Grazia Chiuri authored an extravagant visual tale, one that drew on the founder’s love of gardens. 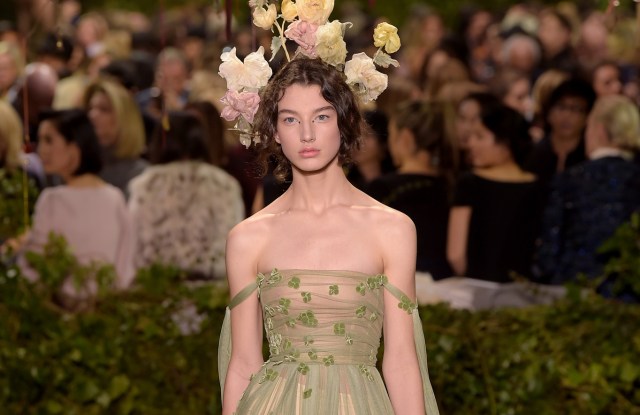 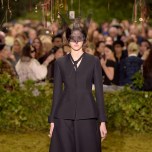 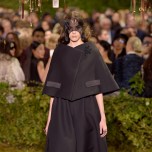 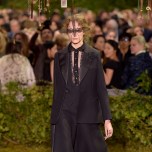 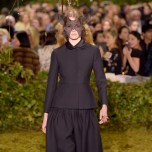 As Maria Grazia Chiuri develops her identity at and for the house of Dior, she feels its complexities and pressures, particularly for couture. It starts with the roll call of her high-profile predecessors. “Mr. Christian Dior, YSL but also Marc Bohan,and Ferré, [theirs] was more an idea of traditional couture,” Chiuri said during a backstage walkthrough of her collection on Monday. “Galliano was very spectacular couture, and Raf was very modernist couture. So I say, ‘OK, I want to determine what it means for me to do couture.’ I think it is important to maintain this idea that it’s wearable, because in any case we have the clients. But at the same time, I don’t want to lose the idea of dreaming.”

Lest anyone think Chiuri would ease into that idea of a wearable dream, think again. For her Dior couture debut, she authored an extravagant visual tale, one that drew on the founder’s love of gardens. Chiuri had one installed on the grounds of the Musée Rodin, hers a fairy-tale place, magical, sinister and overgrown with foliage. Arriving guests wended through an outdoor maze, and once inside, around straight and curved seating of the bucolic sort, covered in dense greenery. Centering the garden: an ominously enticing tree, its branches strung with beads, ribbons and tarot regalia.

Within this setting, Chiuri imagined a masked ball, inspired by the grand, formal-dress extravaganzas of yore; her mood board featured numerous photos of bohemian revelers, and one of Dior himself in dramatic, masked incognito. Populating the party: black tailoring and beautiful gowns.

Chiuri billed the former as referencing tuxedo-wearing men. Her versions, she said, derived from the Bar jacket, “only made for today, modern.” Numerous looks did indeed pay homage to that most famous of tailleur masterworks created by M. Dior. With their voluminous skirts and pants, they also paid homage to Yohji Yamamoto paying homage to M. Dior. Strong and impressive, with cuts of detailing befitting their haute classification — absolutely. But if Chiuri’s frequent invocation of “modern” and “for today” were codes for “easy,” they weren’t that.

Many were in fact the stuff of a dream — yes, a wearable one. Several times during the walkthrough, Chiuri referenced that the prevailing natural-waist silhouette harkened back to M. Dior, and that she reimagined and reworked that baseline for currency. It was as if she were trying to convince herself. But why? While there’s nothing inherently modern about a gorgeous filmy frock strewn with handcrafted flowers, neither is it an anachronism. If a special dress looks beautiful and feels fresh, who cares if Mrs. Methuselah once donned a similar sleeve?

More likely, Chiuri felt compelled to restate the Dior derivation because some dresses rang another bell. Chiuri and Pierpaolo Piccioli, her former partner at Valentino, didn’t create tulle. They didn’t create ethereal or romantic or religious, or celestial embroideries. They did claim all of the above at Valentino, making them house signatures. They also became famous there, before having well-known creative profiles of their own. Since she left and he stayed, in the settling of assets, he gets custody of the codes. Fair or not, as Chiuri continues to develop her vision for Dior, she will have to distinguish it more clearly from Valentino.