The designer sent out an arresting lineup that explored the beauty of movement. 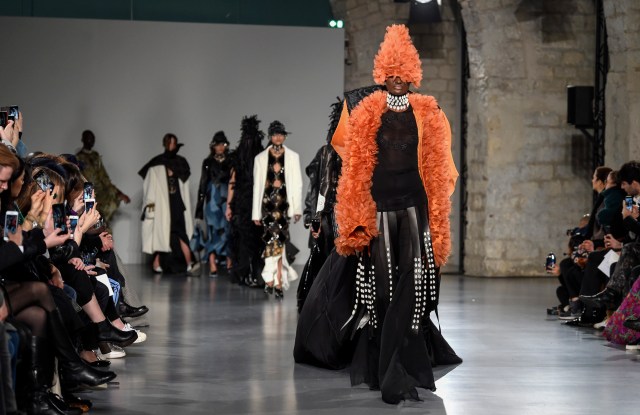 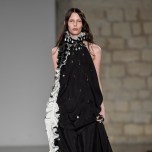 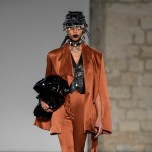 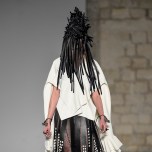 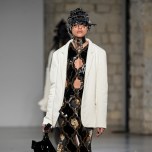 For her third collection, again a guest member of the official haute couture calendar, Hyun Mi Nielsen decided to listen to herself. That meant working mostly on her own, without even a stylist. Inspiration came from migration and magpies, those birds — or humans, for that matter — who collect shiny objects that might be passed over as refuse by the rest of the world.

Warding off any misinterpretation of the theme, she named the show “mensch”: Yiddish for someone of honor and decency.

The models paraded out, their strides hampered at times by flapping straps and long pant legs. There were bare feet, leather ankle bracelets lined with shells, and coats that billowed out behind.

Upcycling was part of the mission. Jean fabrics were patched up with pieces of black leather to make a long, body-hugging jacket dress. The sleeves covered the hands and straps dragged from the matching purse.

The lineup was engaging in the way one would expect from someone of her caliber, a Balenciaga veteran who also worked for Alexander McQueen and Givenchy. But it was also an arresting display of the beauty of movement.

A cropped, white vest was decorated with safety pins, cowry shells, bells and other trinkets — was that a dangling belt buckle? Also decorated in this manner: a stiff, leather collar wrapped around the neck, and that odd cap, made of a thick and shiny material, hung low over the eyes. So much stuff — the objects clinked and swayed on their own, narrow ranges of space.

In contrast was clothing that floated. A male model with dark skin, bare feet and thick silver rings on his fingers swept down the runway, moving straight ahead as layers of the gown flowed behind. Lifting him was the hat — wide brimmed, covered in the same material, its frayed edges floating behind.

She wanted her audience to think about time and space and traveling. Sounds ambitious — it was.

The final piece was a billowing, black gown, an orange scarf billowed off the hat. Before exiting, the model paused for an instant, turning her head to the side, before moving on.