Alexis Mabille's spring collection delivered a blast of rainbow color as an antidote to the winter blues. 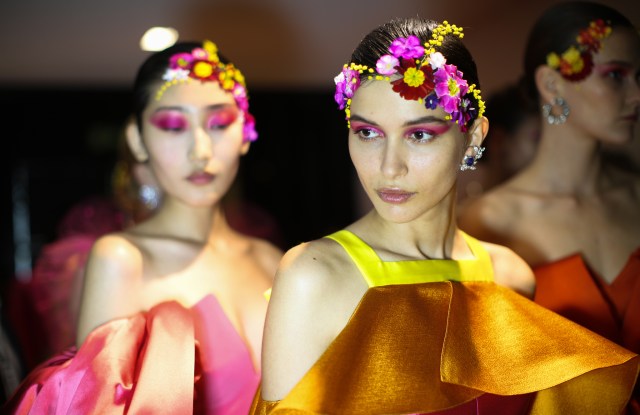 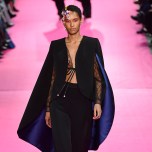 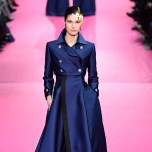 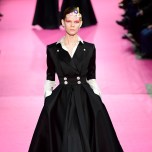 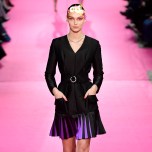 Alexis Mabille has a great antidote for a snow day: As thick snowflakes settled on Paris on the second day of the French capital’s couture shows, the designer presented a colorful spring collection titled “Rainbow Splash.”

“There’s no snow here,” Mabille said backstage, as he put the finishing touches on his models, while makeup artists pressed fresh flower petals around their faces. The idea came from makeup images from the Seventies. “It’s as if they had stuck their head in a giant bouquet to sniff the flowers,” the designer said.

Mabille delivered on his promise with clothes in a full spectrum of shades, from black to neon hues, via turquoise, emerald, navy and gold. “It’s a rainbow in every sense — freedom of color and freedom of expression,” he explained.

As the doors to the venue slammed shut with a blast of icy air, the color therapy began to take effect. A poppy-colored sheath dress came with a matching oversize bow belt, while a handkerchief dress in peony pink crepe sprouted ruffles of birdcage tulle.

Mabille made sure to include his signature staples, such as a black vinyl-effect lacquered jersey trench dress with mesh-effect tulle sleeves and sparkly buttons. But he also experimented with more dissonant tones, pairing fluorescent pink and yellow with gold on a floor-length guipure lace V-neck dress.

He channeled petal shapes into a series of dramatic capes, including a lemon-yellow, duchess satin ball cape attached to a midnight blue sheath dress, and a heart-shaped Lyon lace cape on the closing look — perfect for a white wedding.