It was all still very engineered but with a stronger focus on couture fabrics. 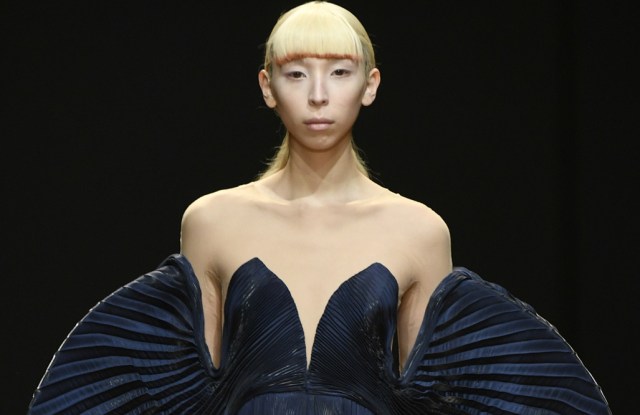 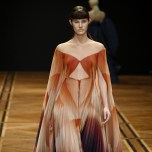 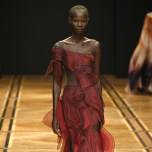 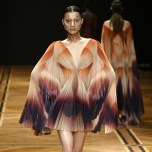 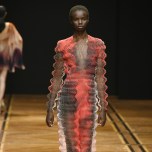 Iris van Herpen this season explored celestial cartography as well as the possibility, with the advances of DNA engineering, of human-animal hybrids one day becoming a reality.

Weighty stuff, but the delivery was ever ethereal, from the opening midnight-blue pleated bustier gown with curved wing-like sleeves, revisited in pleated and printed Op Art versions, to the cream dresses covered in concentric layers echoing a topographic map.

On a long-sleeved column dress made from a 3-D net-like material, waves of neon orange pigment flushed around the body, like flames.

Equally dramatic were the vaporous Cosmica dresses in layers of translucent organza printed with colored clouds by New York-based artist Kim Keever, which lent a surrealist touch. Meanwhile a blue-and-white minidress built from an accumulation of scalloped edged layers — the kind of piece Björk, one of the brand’s followers could pull off — actually resembled a cloud.

It was all still very engineered but with a stronger focus on couture fabrics. The color and dyeing techniques — hooked on a warm palette of ochre, tyrian purple and indigo — also brought a new more grounding dimension to the collection, even if these were gowns destined for some galaxy far, far away.

Cue the finale: a laser beam projection of swirling liquid clouds, with precise lines of light tracing the footwear and hems of gowns to create a glow-in-the-dark effect.

In the words of Coco Rocha, who attended the show dressed in one of van Herpen’s sci-fi creations: “Everything she does, of course it’s art and sculpture, but it’s also what you think the future would look like.”

Van Herpen backstage revealed she is working on a major exhibition for an undisclosed site in Paris for 2020. The designer is also working on a new book and is in the completion stages on her first big architecture project, a natural history museum located somewhere in the Netherlands, which is still under wraps.