Is couture modern? Only as modern as the women who wear it, according to Pierpaolo Piccioli who showed a magnificent collection for Valentino. 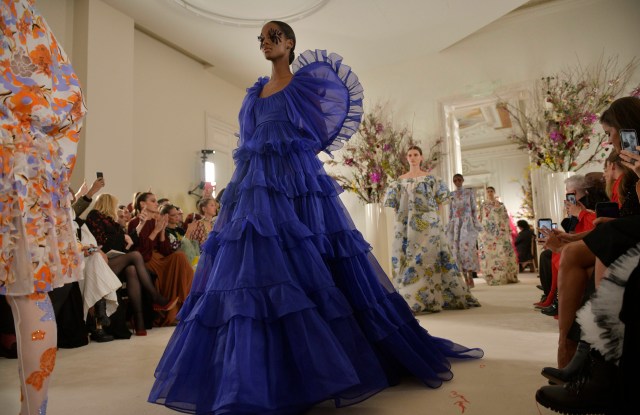 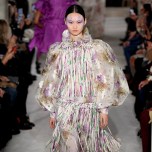 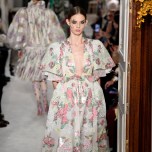 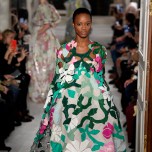 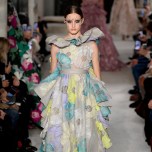 It’s one of couture’s most iconic images — Cecil Beaton’s 1948 photo of a bevy of beautiful women done up for a grand event in lavish Charles James gowns. Today, that image screams period piece, and not just because the dresses, hair and makeup mark it as mid-century. So, too, does its casting: white women all.

On Tuesday afternoon, the picture was affixed to Pierpaolo Piccioli’s mood board in Valentino’s grand outpost on Place Vendôme. Beside it: another photo taken probably 12 or 15 years later, this one depicting several black women in less fancy festive mode. They’re dressed in neat skirts and tops, and the two most prominently featured are dancing together. “What if these women,” Piccioli pointed to the second photo, “were dressed like these [Beaton] women?”

Piccioli had asked himself that question while readying his spring couture collection. It led him to cast mostly black models, from unknowns to Liya Kebede and the eternal queen of the runway, Naomi Campbell. The soul-searching was less about putting a p.c. spin on this most exclusionary consumer product than about addressing an old issue with particular resonance now, at this time of cultural upheaval: Is couture modern or a silly, anachronistic frippery? “I don’t believe in modernizing couture,” Piccioli said. “Couture has to be couture, but you can look it at in a different way.

“The beautiful pictures of couture from the beginning, you only see one kind of woman — white WASPs. You never see a strong black woman….It’s about embracing that idea of uniqueness, which is couture.” In other words, couture is as modern as the women who wear it.

On Monday evening, that argument played out in a tour de force of grace, beauty and wonderment. The prelude felt like an event, with designers Clare Waight Keller, Raf Simons and Giambattista Valli showing up along with more typical front-row celebrity types; Céline Dion would wipe away tears throughout the show.

Piccioli delivered a pitch-perfect harmony of grand volumes and vibrant color, signatures which he continues to find new ways to express. He attended smartly to daywear with relaxed flamboyance — languid shapes in daring color mixes. But this collection — and, let’s face it, most of couture — is about eveningwear, and Piccioli’s dazzled. He built dresses in graduated tiers, princess lines that fell into sweeping trains and vast tent shapes, working in both pastels and bold jewel tones. Throughout, a stunning floral euphoria was realized via the exquisite fabrics and remarkable craftsmanship at the heart of couture — embroideries, ruffles, appliqués, lacework — all utilized intensely, right down to the hand-worked hosiery. Some models seemed transformed into flowers themselves, their heads and eyes encircled in petals. It was breathtaking.

When Naomi closed the show wearing “Chocolate Dhalia,” the name Piccioli’s atelier staff gave to her organdy and organza dress, the rapturous crowd reaction indicated that at that moment, few people were mulling, “But is it modern?” Extreme beauty shuts down the argument.