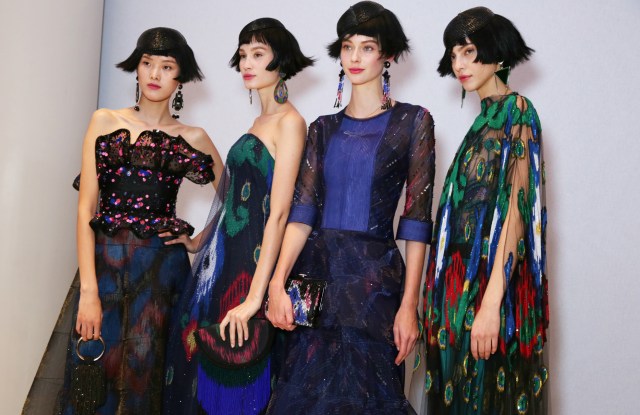 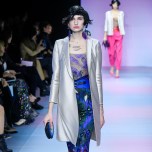 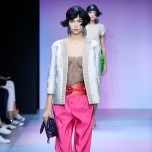 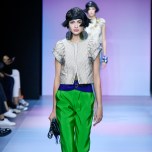 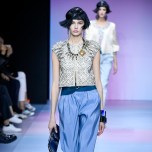 There’s little risk of Giorgio Armani unfurling a highfalutin, obscure or tangled deep-thoughts theme for his couture show. Often he picks a color story or print theme and simply goes to town with it.

Here was an ode to ikat, the Indonesian dyeing technique, whose dense, rich patterns seemed to inspire the Italian designer, famous for greige, to flex his decorative muscles. As if those curling, slightly blurred patterns weren’t enough, he added beaded tulle overlays, embroidered inlays, swishing crystal fringes and sometimes guipure lace, too.

He opened his display with an array of fancy pants, shaped vaguely like sweats complete with gathered, ankle-hugging hems, but done in heavy silks in bright jewel tones or outsized ikat patterns. A few were tamed with taut, compact jackets in neutral tones — until the lavish treatments started creeping above the waist, too.

Armani went for bold, not always harmonious pattern and color mixes, which felt new for him. Ikat motifs rubbed up against brocades and lace with floral motifs, or were etched on their own with beadwork.

The eveningwear was similarly bold, and the best of his gowns had gleaming, solid-colored bustier or slip tops that gave way to fancy, yet gossamer skirts. Like Maria Grazia Chiuri at Dior, Armani seemed enamored with fringe, and also threw in a few duster coats, the surprise silhouette of this abbreviated couture season.

As always, his workmanship was intricate and impressive, but the pileups of embellishment didn’t produce the wow factor one might have expected.

The visual overload left one feeling a bit nostalgic for greige.