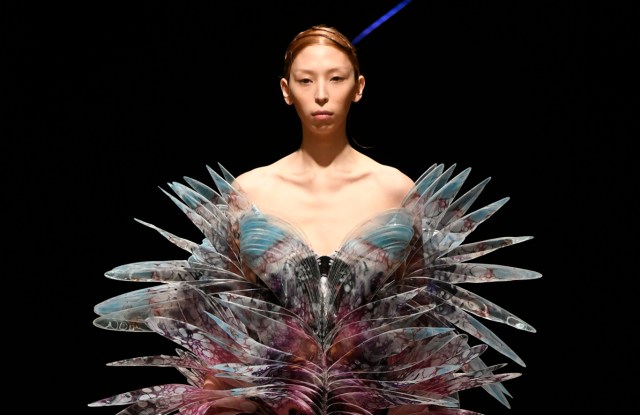 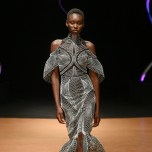 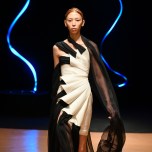 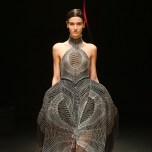 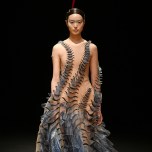 Beyond silhouettes that can awe and defy convention — Gwendoline Christie on the red carpet, anyone? — Iris van Herpen draws anyone who encounters her remarkable clothes into her scientific fascinations. For this season’s “Sensory Seas” collection, there were two, intertwined references: hydrozoa, delicate deep-sea organisms that lent their wispy tendrils to her dresses, and the illustrations of Spanish neuroscientist and pathologist Santiago Ramón y Cajal.

“I was mesmerized with the way art and science merged [in his work],” the Dutch couturier said after the show, which opened with a black dress that looked like the neural pathways he had mapped out in the late 19th century.

Prints seemed to blend into the skin, as did soft spines that emerged from it, or concretions of fabric that opened into honeycomb structures. One of the finale dresses was particularly otherworldly, its hand-cut glass organza protrusions blooming with every step, making the model resemble some regal marine creature. Heightening the sense of strange science at work was the backdrop: three columns of whirling lights resembling strands of DNA, an installation by British kinetic artist Paul Friedlander. Despite their underwater inspiration, the dresses also brought to mind bird wings, stone formations or currents.

There were also gowns that seemed to rely on more traditional crafts, printed with rivulets of red, black and blue running down the shoulder and flowing towards the ground in great swathes of fabric. These illustrated the shrinking distance between traditional couture craft and the technological textile advancements Van Herpen has been developing. “It just goes more naturally because I am more used to combining the two processes,” she said, pointing to a silk that had been pleated by hand using bonding techniques, 3-D embellishments that had been printed atop silk chiffon and the combination of traditional embroidery and laser-cutting on a kimono dress.

With this show, Van Herpen proved that technology and hand-craft — not forgetting imagination and artistry — can summon wonderment.