John Galliano started from a baseline of bourgeois familiarity and then did something weird with each look — but never too weird. 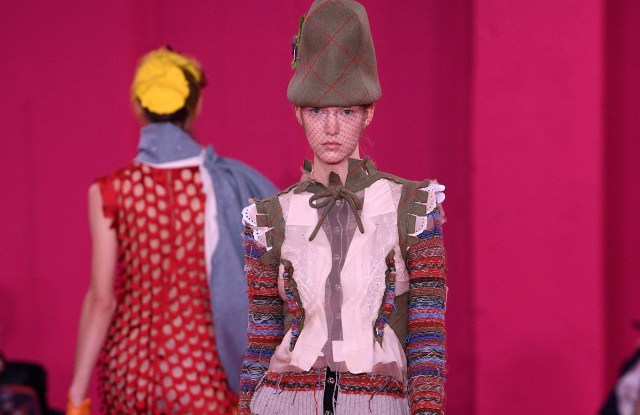 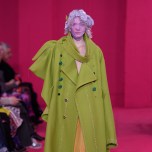 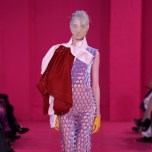 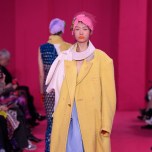 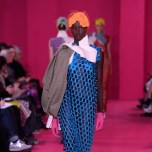 Arriving guests settled into spindled chairs painted shockingly pink in a shockingly pink salon of one of those grand Paris mansions in a state of exquisite dishabille (except for the staircase, its steps perfectly level and not at all worn down. It could have been installed yesterday). The clock ticked, allowing for e-mail perusal (John Galliano was running a tad late), so I opened the press release for Galliano’s soon-to-start Maison Margiela Artisanal collection. A deep-thoughts missive to boot: “Creative director John Galliano identifies the nature of the bourgeois gesture and investigates the impact of heritage codes in the age of cyber-industrial revolution.”

Later, I would listen to the corresponding installment of “The Memory Of…” podcast in which Galliano expounded on that thought, linking it to sustainability, repurposing and the inevitable evolution of consumerism. Between press release and podcast, certain words repeated again and again — heritage, values, tradition, codes, emotion and, especially, forms of the word bourgeois. “Recycling of bourgeois codes.” “Colors subliminally associated with the bourgeoisie.”  “Once our bourgeoisie inspiration is nailed, we will rebel against it, we will recycle in order to upcycle our rebellion.” Always, the context noted the importance of familiar touchstones, those codes and traditions essential to defining who we are, acknowledging their ingrained significance yet feeling empowered to reshape them. In fashion, that might mean creating a piece from upcycled materials or perforating the heck out of it.

The show started. First look out: a lean dress with allover half-dollar-size holes cut into it, a jacket — or half a jacket; hard to tell — tied in a big bow at the neck. Galliano recently worked this holey motif in ready-to-wear, too, with a considerable acceptance rate, at least among fashion types; several showgoers wore tailored variations. Next out, a big coat in audacious pea green with dressmaker stitches still in place, one of a host of sumptuous outerwear pieces. And so came Galliano’s parade: a pastiche sweater (smart money’s on upcycled) over Donegal skirt; various boxy tailored looks, some with fake furriness spilling out from inside (Galliano has sworn off real fur); multilayered shirtdress built on culottes, and a demonstrative first look at the brand’s Reebok collaboration, the feisty shoe a Tabi-Instapump Fury hybrid. As for the evening, the bias is back, big time, some worn one delicate, flimsy bias beauty atop another, and sometimes under thick, chill-chasing coats.

For virtually every look, Galliano started from a baseline of familiarity and then did something weird with it, but never so weird that you lost the baseline, “the bourgeois gesture [that] signals a shared social heritage.” Watching the parade, I thought about what a great creator Galliano is. And about Jennifer Aniston.

Not Aniston in general, but Aniston at Sunday night’s SAG Awards, who sent social media into conniptions in her out-of-the-closet vintage white John Galliano for Dior bias-cut gown. She didn’t accessorize with fishnetting over her face or blue lipstick like some of Galliano’s Margiela models. She didn’t add a Galliano-esque element of weird-chic je ne sais quoi that today’s Galliano would likely employ. She didn’t have to. She let her fabulous 50-year-old self and a beautifully familiar dress wow the world.

Whatever the year of that particular dress, it was of a genre with which Galliano years ago led the purveyors and consumers of fashion away from the atrocity of Eighties/early Nineties eveningwear. By his own definition, even then it had a bit of bourgeois, its lineage traceable to the Thirties.

Now as then, Galliano proved the power that can come of embracing the familiar, especially if you take it somewhere fabulous — and maybe even new.