Inspired by the Roman goddess Voluptas, Alexis Mabille offered up a dramatic wardrobe full of movement. 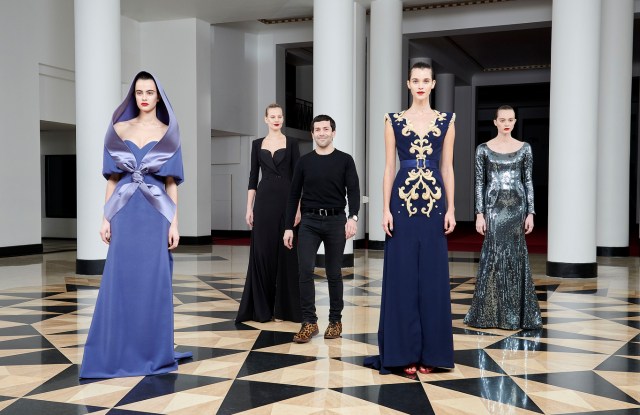 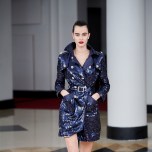 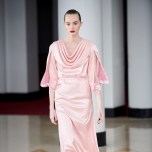 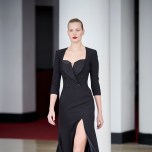 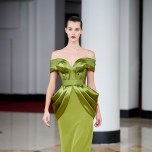 Alexis Mabille went back to a runway format, filmed inside an empty Salle Pleyel, using it to highlight the all-important movement in what he described as “structured flou” creations.

The designer said the heart of his inspiration had been the goddess Voluptas, the daughter of Psyche and Eros in Roman mythology. This translated into a wardrobe that offered dramatic draped and pleated gowns with a Second Empire influence alongside cinematic tailored silhouettes.

On the more structured side, particularly striking were a chartreuse crepe sheath dress with draping details highlighting its corset and the wearer’s hips, and a slit-skirt black gown, its bodice a reinterpretation of the smoking jacket with the lapels cleverly tucked in to support the bust and form a sweetheart neckline. In periwinkle blue, a crepe gown with a giant draped hood and outsized pockets was a vision of what neoclassical dressing could mean in the 21st century. A handkerchief shirt in delicate white muslin with jacquard and lace details was a hybrid between a poncho and a blouse, and offered an alternative to an evening dress when paired with black tuxedo pants.

Elsewhere, a deep blue sheath was embroidered in three-tone metal arabesque patterns, highlighting the body. That midnight hue also formed the basis for voluminous tulle designs that were printed with floral motifs and layered to give a blurred effect. These included a full skirt paired with a taffeta batwing top woven in 10 different shades of thread, meaning it seemed to change color with the light, a trait many of his fabrics shared.

With the pandemic ongoing, his studio had done much of the handiwork in house, the designer said, but he highlighted how couture remains a rare opportunity to support artisan fabric makers and ensure their continuity, too. Among the techniques used, the sequins on a seemingly simple jersey sheath with a scoop neckline were stitched on individually so the threads could not be seen, while the delicate forms of lace or embroidery hugged the body perfectly thanks to intricate appliqué techniques.