Whether or not he had in mind America's political pantsuit fashion trend, it felt right to make his trophy jackets the jewels of the collection. 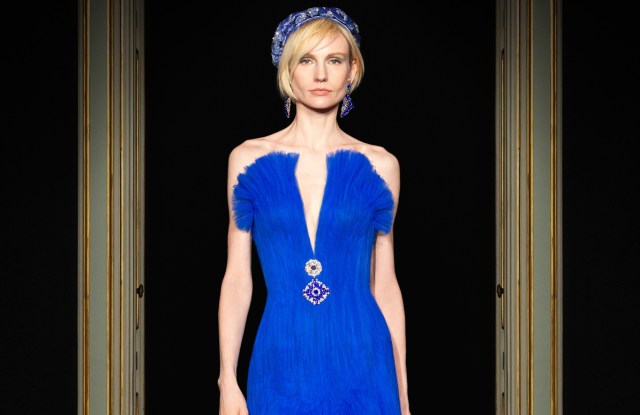 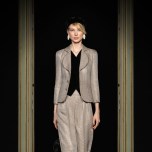 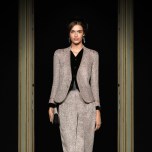 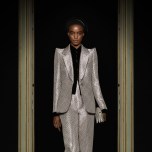 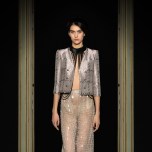 Cinematically inspired since making costumes for the cult film “American Gigolo” in 1980, Giorgio Armani has taken naturally to the new COVID-19 reality of filmed runway presentations.

Not that he doesn’t yearn for a return to in-person fashion showmanship, but bringing his latest couture collection to film was a chance to think differently about location (he brought viewers into his famed fresco-filled, 17th-century Palazzo Orsini headquarters); model casting and beauty (a natural look nodding to the sober times, and jaunty hats kept to a minimum), and editing (shorter, so it didn’t become too boring, said the designer, who has been studying other filmed presentations for research).

Clocking in at just under seven and a half minutes on screen and 50 looks, the result was one of his most concise collections in memory and better for it. Unlike in some other fashion films, the camera and lighting lingered on the rock candy floral embroidery, marabou pants cuffs and ropes of glittering stones on a velvet bustier gown so you could appreciate what makes couture different.

Whether or not he had in mind America’s political pantsuit trend or not, it felt right to make his trophy jackets the jewels of this collection — allover crystal-covered, in twinkling greige geometric embroidery, with peaked velvet shoulders, or trailing crystal-dotted tulle. The collar details were also delicious: sculpted from crinoline flounces, twisted in satin blooms, pleated into taffeta flourishes. On the bottom, fluid trousers (OK, some were crystal mesh), and sleek high-waisted black velvet pants are all you needed.

Despite the muted awards season in store, the spinner of so many red carpet dress moments for Zendaya, Cate Blanchett, Lady Gaga and more didn’t leave out more fanciful eveningwear entirely, playing with transparency on a watery pastel floral slipdress, an embroidered jumpsuit veiled in tulle, and suggestive halter gowns with sheer bodices and bosoms barely covered by ropes of crystals. In the pure fashion fantasy category, Armani also delivered — a magenta red crystal-covered ballgown draped in tulle and fastened with a rosette on one shoulder is the stuff of Valentine’s Day dreams.

Selling couture during a pandemic won’t be easy, he acknowledged. But after skipping July, Armani wanted to get back in the game for spring — and honor the work of his home team, his couture atelier, 60-people strong, all of whom he has managed to keep employed through the health crisis. Bravo to that.