Virginie Viard's spring collection was inspired by a wedding party — with a very exclusive guest list.

IsSixWeeksAfterFashionWeek = false
By Joelle Diderich
with contributions from Miles Socha
on January 26, 2021 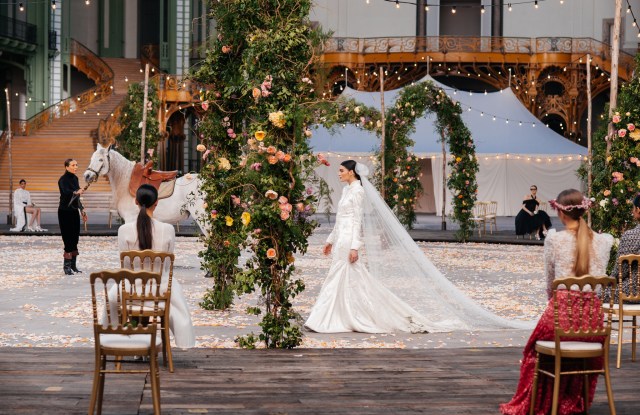 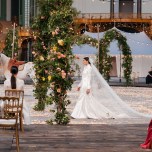 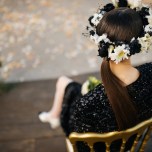 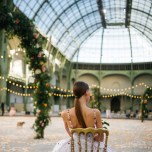 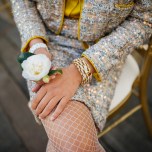 We’ve all seen the photos of coronavirus-era weddings, with their small parties and socially distanced chairs, so there was a whiff of familiarity to Chanel’s set-up at the Grand Palais in Paris for its spring haute couture collection.

Gilded chairs were sparsely dotted on the wooden floorboards of the circular runway, while the decor consisted of flowered arches and a single string of lightbulbs — though visitors to the set of the video shoot, held without an audience on Monday, were also bathed in the glow of a massive bank of film lights.

Creative director Virginie Viard wanted to recreate the feel of a village celebration, so she reversed the order of the show, sending all the models at once down the curved stairs of the soaring glass-and-steel building, like a group of guests emerging from a wedding ceremony.

“People are craving for warmth, tenderness and cheer. A wedding is a bit like a family celebration,” she said, watching the action on monitors set up behind a white tent in the vast venue. “There’s not a lot of clothes, so it’s not really a huge party. But even 30 guests is nice.”

As guest lists go, this one was particularly exclusive: The audience consisted of celebrities, including Penélope Cruz, Lily-Rose Depp, Marion Cotillard, Vanessa Paradis and Charlotte Casiraghi, the latest addition to Chanel’s stable of brand ambassadors.

The film was directed by Anton Corbijn, who also shot atmospheric black-and-white portraits of the participants in Chanel’s recently renovated couture salon on Rue Cambon — the glossy photos mounted in a family album sent to guests watching remotely.

Viard said she stayed in touch with Corbijn, known for his work with bands like U2 and Depeche Mode, after he shot her for Vogue last year. “’Control’ was my favorite movie,” she said of his biopic of Joy Division singer Ian Curtis. His documentary style chimed with the mood of the season.

After her baroque collection for fall, Viard focused on colorful outfits with unexpected volumes: think tiered skirts and flamenco ruffles. She cited inspirations like Emir Kusturica’s 1988 film “Time of the Gypsies” — though it might surprise some people to learn that founder Gabrielle “Coco” Chanel was also fond of a peasant skirt.

Whether split to the thigh or paired with a demure white blouse, the long skirts hewed close to the Chanel aesthetic. Viard let loose with rhinestone embellishments that consciously flirted with bad taste, accenting the sheer midriff of a black chiffon dress with a diamond belly chain (after all, there is always that wedding guest whose outfit is a little extra).

The frothy concoctions contrasted with minimal tweed vest-and-trouser sets: The Chanel woman this season stood in for both female and male guests, a bit of gender-bending that would no doubt have pleased Coco Chanel, but that felt a little low-key for a couture collection.

Viard said she was inspired by the riding outfits of the Camargue region, where travelers from all over Europe gather for an annual pilgrimage to honor their patron saint Sara — a mood also captured by a lilac tiered sundress, and a minidress with a detachable train covered in translucent daisy flowers.

Cruz was not taken aback when Chanel’s bride, traditionally the last exit of a couture show, came out riding a horse side saddle. “You see that in the south of Spain. It reminds me of lot of that kind of wedding in Andalusia,” she said with a smile.

The actress said she found the family-wedding theme moving. “(Virginie) is somebody who really cares about family, and I feel the same way. I’ve been raised like that. It’s the most important thing for me.”

By contrast, it was all new to Depp, who confessed that she has attended very few weddings, while relishing the prospect. “Any occasion that we get to celebrate love and the union of people that we care about, it’s always a very special moment!” she enthused.

“Confidence! Love! Passion!” a voice shouted over a megaphone, exhorting the models to exude joie de vivre. But despite the airy textures, the candied-almond colors and the upbeat soundtrack, there was a melancholy tinge to their procession: This event was designed to be experienced from a safe distance, after all.

Bruno Pavlovsky, president of fashion and president of Chanel SAS, said the house has adapted to coronavirus restrictions by engaging its wealthy couture clients over Zoom and FaceTime, with the help of local teams who can make adjustments to the made-to-measure clothes once they are sent over from the house’s workshops in Paris.

“We listened to our clients’ needs, but we also asked them to work remotely, which is never the intention of haute couture. Haute couture is something tangible that demands to be touched and seen and discussed with the heads of the atelier. We tried to recreate all that at a distance, and we now know what we need to do to make it even better,” he said.