The designer did not scrimp on tulle, delivering the "extravaganza" his clients demand. 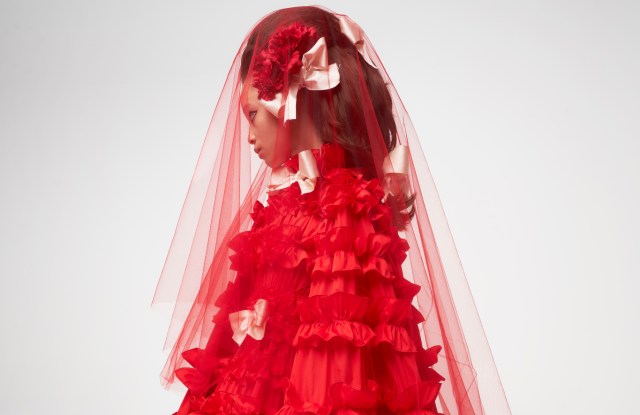 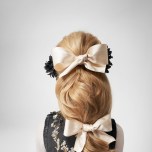 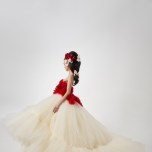 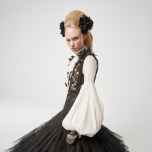 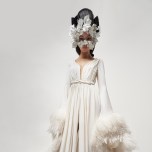 Giambattista Valli’s film for his spring couture opens with a split screen: the stunning Andalusian castle La Casa de Pilatos on one side and a model twirling in a ruffled cape in red taffeta on the other. Valli captured the Seville scenes himself last December, and made plain in his diptychs how the architecture inspired his designs, in color and grandeur.

Dramatic sleeves are already emerging as a thing this couture week, and Valli had ballooning bishop styles on one blouse and flared ones ringed in ostrich and cock feathers on dresses. They coiled dramatically past the wrist on a draped silk crepe evening gown that had Old Hollywood written all over it.

The designer didn’t scrimp on the tulle for his signature ballgowns, still wider than any doorframe and as ravishing as ever in dusty pinks, pure white or dramatic black flecked with gold dots. Asked how many hours it took to craft the frothy marvels, the designer made a face.

“If I’m a customer, and I hear how many hours, how many meters of fabric, I’m already tired. I want something that is like that,” he said, snapping his fingers. “Like it was made in one night effortlessly.”

These dresses? Hardly, with their intricate embroideries of leather-cut flowers and leaves, their dense ruffles and their perfect panniers in heavy silk. Regulars at Valli’s couture shows may have memories of models laboring to move and dragging their dresses like heavy bails of fabric. This time his models, interacting with a faun-like dancer dressed in Valli’s first feathery piece of couture for men, seemed just as light on their feet, and cast a romantic spell.

Valli said he didn’t think for a second about playing it safe because his mostly under-35 couture clients would also make a face. “They want extravaganza. They want extraordinary,” he said. “They want to collect pieces, almost like a piece of art.”