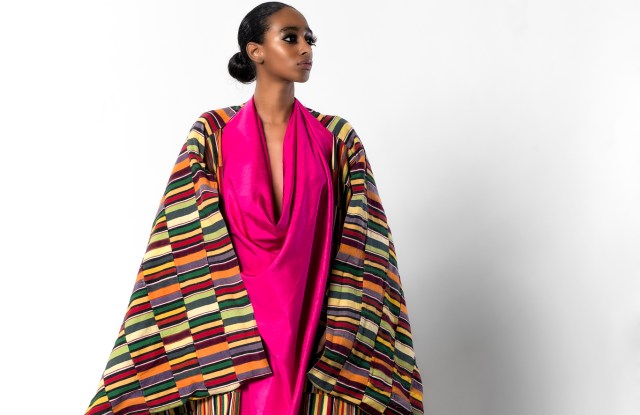 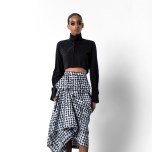 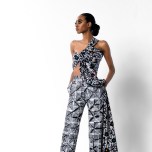 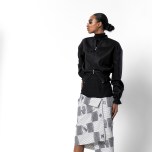 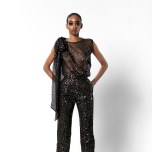 It may not have had the buzz of his couture runway debut in Paris a year ago. There, guests in tears queued up to congratulate Imane Ayissi, the first designer from sub-Saharan Africa to feature as a guest on the official calendar.

But Ayissi’s spring presentation was no less of a celebration, the model dancing to the beat of an uplifting soundtrack fusing West African percussion with electro and rock rhythms by Ivorian musician and composer Manou Gallo.

Seeking to support and highlight textile craft from across Africa, with which he draws parallels to couture, Ayissi cleverly spliced traditional fabric-making techniques with silhouettes that merged European and African influences.

Called “Tseundé,” which means “exchange” in the Ewondo language, he sought his references in the colonial period, when Europeans brought their sartorial codes to Africa, in conflict with traditional dress that was draped over the body, leaving it free to move and more suited to the climate. Ayissi combined these two currents, historically conflicting, and turned them into a harmonious message.

His floral-print crinoline dress would not have looked out of place in a costume drama, were it not for the holes cut out of the sides of the bodice, baring the skin and giving it a contemporary twist. Evening gowns were draped across the body, attached on one shoulder, a sign of social status and rank in Africa, Ayissi said.

A voluminous iced coffee-colored taffeta version trailed the floor, while in another look, a strip of silvery snakeskin-like jacquard looked to be simply draped across the body, but was in reality astutely held in place by rows of covered buttons.

Hand-woven Kenté from Ghana was sewn in strips to create draped skirts and a majestic, colorful coat that trailed to the floor, while block prints and batiks formed graphic motifs on tailored separates and draped dresses.