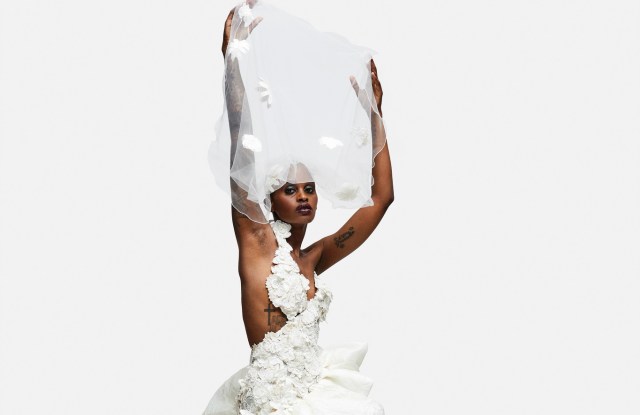 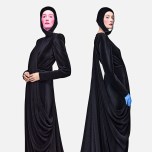 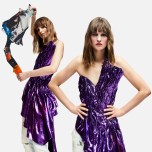 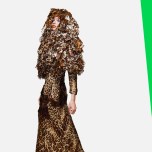 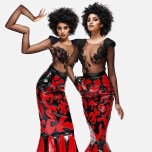 In his “Ethical Dada” collection, Ronald van der Kemp questioned a world he considers gone mad, creating a cast of Surrealistic characters and dressing them with his upcycled waste creations in what he described as “apocalyptic couture.”

He took his eco-stance even further this season, working with leftover fabrics from previous collections, already sourced from deadstock, and creating a sort of collage, painting over prints and sewing appliqués on top, making certain looks vaguely familiar yet not. “I haven’t bought anything for more than a year,” the designer said in a Zoom preview from his studio.

One gown evoked a split personality, looking like three different pieces depending on the angle; others channeled an underground party vibe — topical when clandestine fêtes are a thing and there are anti-curfew protesters on the streets of Amsterdam. To wit, one such party was the setting for his “Behind Closed Doors” video, set in an empty hotel.

As such, there was a glam punk feel to much of the collection, with exaggerated shoulders, accentuated bodices, long gloves, high-shine fabrics and chain details. His reinterpretation of the tuxedo suit came by way of a bib-fronted top that was open on the sides and back and paired with black pants.

His bride was traditionally clad in white organza, although her gown was forged from damaged fabric that was layered, shaped and adorned with lace and appliqué flowers, disguising its flaws.

For the second time, the designer partnered with Carpet for Life, an organization working with women in Morocco, to create a leopard print hooded cape dress and a jacket — van der Kemp’s version of a fur coat.

When it came to newness, there was one exception to the rule — he worked with Dutch firm I-did, which recycles old uniforms from the likes of KLM and turns them into felt, using their fabric to create a seamless corset that was adorned with metal chains.

In the current context, van der Kemp is questioning more than ever the need to create more stuff, particularly clothes. There was no scrimping when it came to technique, however, with handiwork galore ranging from skillful draping to the floral embroideries on barely there tulle and the hand-painted motifs of several designs. His underworld aesthetics, meanwhile, were coherent with the theme, providing a touch of escapism while reminding us of the harsh realities of over-consumption.