A study of the full-skirted Menina sculptures by Manolo Valdés stole the show, light and imposing, all at once. 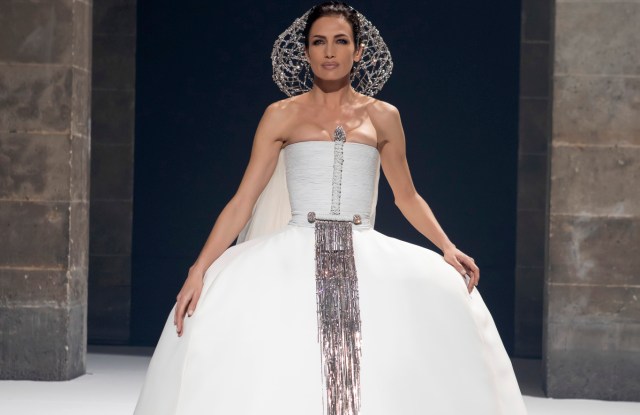 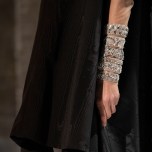 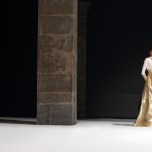 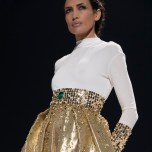 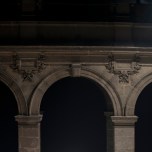 What would it look like if one of Manolo Valdés’ Menina sculptures were to simply lift her skirt and float off of her pedestal? Stéphane Rolland showed us exactly this, with a series of Menina dresses that capped his spring couture lineup — and stole the show. At once light and imposing, they had full skirts of silk gazar that sprang out of taut corsets embellished with golden chains and woven leather, and, for the finale, a train affixed to the back of a shoulder-less wedding gown.

Rolland was thinking of the Spanish golden age and the court of that time, which he interpreted through his own, contemporary lens, as well as the prism offered by Valdés — and ample use of gold and black. The artist himself had drawn influence from Diego Velázquez’s 17th-century masterpiece, “Las Meninas.”

“For a long time, I hesitated — how could I pay homage to the work of Valdés? Because for me, the Meninas are perfection,” said Rolland, speaking from a wing of the neoclassical Theatre de la Villette in Paris as Nieves Álvarez was fitted for the film.

Deep into the exercise, he realized he shared certain codes with the sculptor.

“I always start with a square and a circle, because that, for me, is absolute perfection. You have the square, the quadrature, force, density, rigor, and with the circle, you have perfection, the infinite, balance — there is nothing as perfect as a circle,” he said.

The collection featured asymmetry, too, and Rolland offered his signature floor-length, body-hugging dresses, one with a dramatic puff of sculptured gazar jetting off of one shoulder — as if a piece of fabric were torn from the sleeve and took on a life of its own. There was also an abundance of Zouave pants and jumpsuits, dressed up with cascades of chains and woven, black leather belts.

Headpieces were captivating. One was formed with gold crystals, framing the head with large swirling petals, while another, woven from black rattan cane, swooped out in back like an oversized hair bun.

“It’s a collection full of force, glamour — lots of things — first of all because it’s during nightmare periods that you have to be the most positive and the most creative, right? And it was out of the question that we skip a season,” he said.