"I kept thinking about couture as the idea of touch and soul, and what it would mean to a 25-year-old," the designer said. 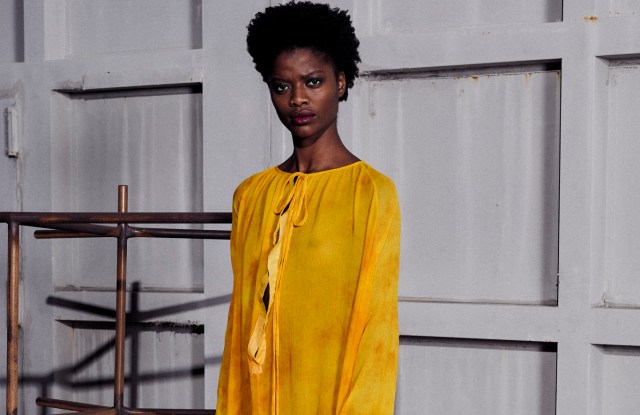 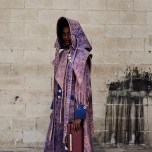 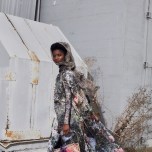 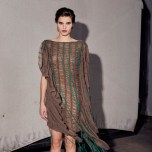 The multihypenate — whose work spans painting, sculpture, ceramics, collage and fashion — was invited as a guest designer by the Federation Haute Couture et de la Mode, an honor he said put wind in the sails of his team of eight after they’d had to cancel three collections because of COVID-19.

“I’m not suggesting I’m doing a traditional couture collection…,” he said, acknowledging his outsider status. “But I relate to the hand and craft of it. Even outside of this collection, we are in the same room making painting, sculpture and ceramics, so the atelier part of it makes sense to me. I kept thinking about couture as the idea of touch and soul, and what it would mean to a 25-year-old.”

Ruby revisited some of the same themes seen in his PItti Uomo debut, only with amped-up volumes and craft details, including yarn spun from wool from Isabella Rosselini’s Long Island sheep farm. (So L.A.)

The concept wasn’t as overtly political as his Paris ready-to-wear outing, a brutal anti-Trump film titled “Veil Flag” that urged voter participation. Instead, he responded to the moment of national reckoning by reexamining American archetypes (Puritan bonnets and cloaks, prairie dresses, acid wash skater denim, pinstripe suits and society gowns), and using them as canvases for his renegade scribbles, splatters, enzyme-rinses and yarn doodles.

His DIY spirit, by the way, was nurtured while growing up in a conservative community in Pennsylvania. “When I would wear my own clothes to school, it did not go well,” he laughed, explaining how wearing patchy shirts with magic marker drawn album covers and nail polish in junior high led to his first confrontation with narrow mindedness.

“I love meeting younger people who don’t have biases to hierarchy in art, film, TV, music and fashion,” he said of his inclusive creative stance.

While there may be a limited (Art Basel adjacent?) customer for Ruby’s gorgeous green gown shaped to the body by ruching and with winged shoulder flourishes; his cool David Byrne-proportioned flouro-orange plaid suit; a floaty, tangled twig-print dress and “instrument case” (for when you want to match your outfit to what’s on the wall) and fuzzy-wuzzy hand-knit plaid cocoon coats, they have deep pockets. And the line between couture and art is thin, especially for those who collect both.

“We have a very wide-ranging base of customers, from a 25-year-old musician to a 70-year-old art collector,” Ruby said. “But everyone in that range wants something unique and limited, so that’s what we’ve done.”