Pierpaolo Piccioli steered Valentino in a new direction with an austere, modernist collection. 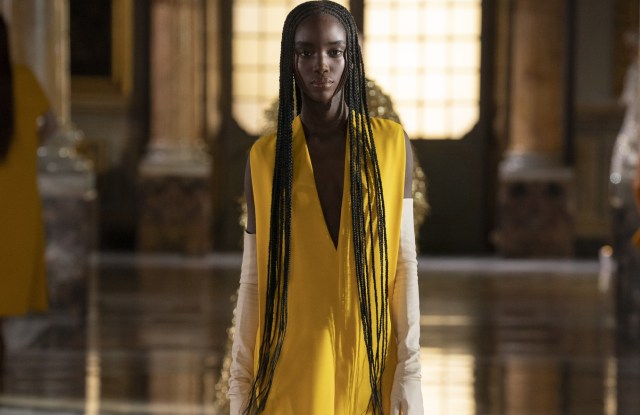 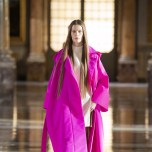 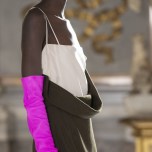 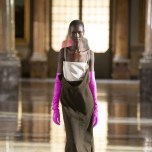 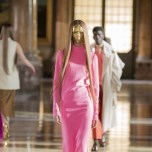 Pierpaolo Piccioli steered Valentino in a new direction with his spring couture, surprising with a collection built on minimalist shapes, zero prints, towering metallic platforms, shots of neon color, Lurex and allover sequins. There was also couture for men — a Valentino first — including what must be the most expensive and labor-intensive chinos on earth.

“It was an act of fashion,” Piccioli said via Zoom from his book-stuffed office in Rome. “I wanted to express the essence of couture in something that was contemporary…that would give a different perspective on the future.”

The pre-recorded fashion show had models treading to a pulsing Massive Attack soundtrack through the baroque splendor of the Galleria Colonna in Rome: some had their faces painted gold and many had long, poker-straight hair parted in the middle — like Cher, Naomi Campbell or Rick Owens, depending on your references.

The contrast between the gilded surroundings and the slender, modernist silhouettes was striking, mesmerizing — and maybe a little disorienting for those accustomed to the stirring arias, grandiose volumes and big bouffants that recently defined Valentino couture shows. But isn’t fashion about change?

The collection skewed more toward daywear and items rather than ensembles, which nudged Piccioli to include men in the show, realizing that trenchcoats, turtlenecks and Bermuda shorts are genderless garments — although hardly ordinary ones done up the couture way.

A yellow tube dress that looked like a chunky rib knit was actually realized with tiny tubes of hand-rolled fabric — some 900 meters of it — painstakingly stitched into uniform rows. (The effect is known as Budellini.) Porous capes were maddeningly complex origamis of cashmere strips, or hand-knotted squares of fabrics in gradient sizes. And those chinos, by the way, had no outseams.

The austere shapes and often muddy colors added up to a subdued Valentino couture for sophisticated fashion purists.

Indeed, there’s no hiding flaws on simple clothes, and Valentino’s were peerless, and often sheltering secret features only the wearer will know: like the inner corset that allowed an off-the-shoulder neckline on a fuchsia coat, or the cashmere bonded inside a roomy trenchcoat. “Couture can also be something that is hidden,” Piccioli said. “I wanted to arrive at that simplicity in the end, even if it took months.”

And it did take months, with the process all painstakingly recorded. Piccioli conscripted Massive Attack’s Robert Del Naja, who is collaborating with another artist, Mario Klingemann, to feed the footage into a computer. An algorithm will have a go at organizing and compressing the intricate work of skilled seamstresses and tailors, and create an artwork incorporating sounds and images.

The computer is expected to finish its work before the end of the week. What will it make of those chinos?