There were oversized t-shirt dresses printed with a smattering of religious symbols, Colonel Sanders or images of an atomic bomb explosion. 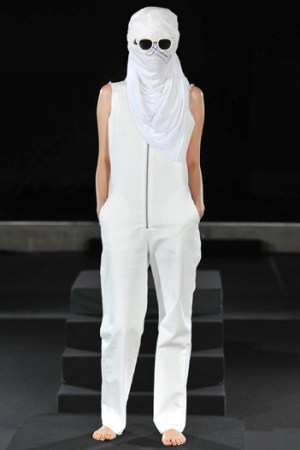 Dispensing with tradition, Mikio Sakabe invited members of the general public to attend his spring/summer show, packing one entire end of Tokyo’s Yoyogi National Stadium. Models climbed up and down raised platforms in sleeveless white jumpsuits worn with head and face scarves. There were also oversized t-shirt dresses printed with a smattering of religious symbols, Colonel Sanders or images of an atomic bomb explosion. Dancing models, some wearing heads of Hello Kitty and another celebrated Japanese cartoon character Doraemon, wrapped the show. Sakabe said he wanted to make it easier for young people to talk about difficult subjects and the problems of the world by addressing these topics with fashion.