It was up to Stefano Citron and Federico Piaggi to put their stamp on the storied brand. 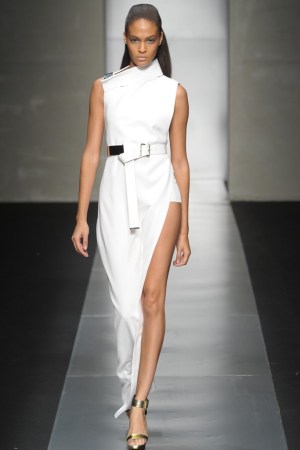 A new season, a new design duo at Gianfranco Ferré. After Tommaso Aquilano and Roberto Rimondi’s exit earlier this year, it was up to Stefano Citron and Federico Piaggi — veterans of Mila Schön, Byblos, Cruciani and the house’s secondary GF Ferré line — to put their stamp on the storied brand. As inspiration, the show notes cited “a principle of utter lightness that transforms sartorial essence and geometric line into a glam dimension high in seduction potential.” Citron and Piaggi started with out a sleek lineup of mostly white dresses, jumpsuits and separates that looked elegant and sophisticated. But before long, the designers amped up their use of bare skin as a key design element, with many of the looks exposing parts of the midriff, shoulders and backs, like one-shouldered blouses or backless wrap dresses with a scarflike feature held together by a sculpted metal belt. The effect was graphic, though some of the looks felt a little tricked up. Citron and Piaggi’s challenge is to update and make the late designer’s aesthetic relevant, and it will be interesting to see how they evolve in future seasons.