Frida Giannini has been on something of a roll of late, her last few collections delivering her signature Gucci flash with an essential tony hand. 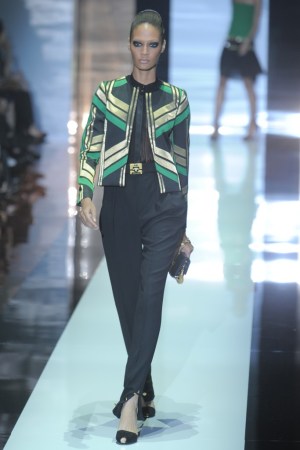 Frida Giannini has been on something of a roll of late, her last few collections delivering her signature Gucci flash with an essential tony hand. The trend continued for spring with a lineup that was solidly on trend without straying from the designer’s own, ever more confident wavelength. Wistful elegies to Gatsby — not Giannini’s thing. Thus, she played the power side of the Jazz Age, which made perfect sense for her Gucci girl.

By day, the connection to the decade du jour came not via silhouette (save for some dropped-waist dresses) but decoration. In fact, short, shapely jackets over high-waisted pants tapered toward the ankles swung Eighties, but they were worked in a Deco-worthy palette, primarily black, white and gold with shots of green. The jackets boasted Giannini’s “hard decor” — whether pristinely audacious, jewelry-inspired closures or mega graphics à la the Chrysler Building. In terms of surface interest there was more going on in riffs on animalia (a sort-of zebra pattern in two-tone python), and a mega scarf print, shown as a dress and, in the collection’s only serious don’t-go-there moment, pants.

For evening, Giannini gave in more fully to the charms of the flapper. She co-opted her chemise and dropped-waist silhouettes and lavished them with audacious architectural goings on crafted from sequins, metal, Plexiglas paillettes and miles of metal chain fringe. It made for one successful shimmy — the kind that will shake on off the runway looking all as good on client, celebrity and civilian alike.